The SEIU & Obama's 'Jobs Summit': How much influence will the Queen of Labor have? 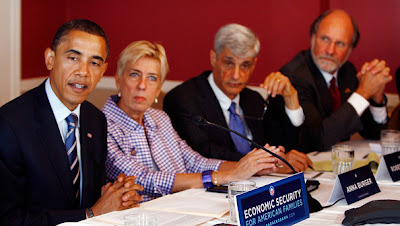 Behind every man, there is a woman…
Behind every king, there is a queen…
Behind SEIU boss Andy Stern, there is Anna Burger.
Who is Anna Burger?
She’s the less public face of the Union of Purple People Eaters (aka the Service Employees International Union). But her less-public profile should not fool you. She is as every bit as powerful (and perhaps moreso) than her public counterpart, the Lord of Labor, Andy Stern.

When SEIU boss Andy Stern broke apart the AFL-CIO in 2005, Anna Burger’s the woman that he appointed to head his new federation “Change to Whine Win.”

Make no mistake about it: Anna Burger is the Queen of Labor.

If Andy Stern is the hand in Barack Obama’s puppet, Burger could easily be the rubber glove.

In addition to her bonafides in the utmost upper echelons of the union pyramid scheme, Ms. Burger also happens to be the vice chair of George Soros’ Democracy Alliance.

When people focus on Andy Stern, they lose sight of just how powerful Ms. Burger is and how integral she has been in helping orchestrate the Left’s coup d’ etat…and how she, like Andy, has the president’s ear.

On Thursday morning, President Obama is holding his overly-touted “Jobs Summit”. As Politico noted over the weekend:

It’s one of the oldest tricks in the presidential playbook: when you want to focus attention on an issue, hold a meeting and call it a “summit.”

However, on Sunday, with union bosses on the exclusive invite list, we questioned whether union bosses would use the “jobs summit” to push the job-destroying and hallucinogenically-named Employee Free Choice Act (EFCA).

All evidence suggests that, not only were we correct in our assumption (that EFCA would be pushed at the jobs summit), but that union bosses plan to use the jobs summit to push even more government spending programs that will further add to the nation’s debt.

Considering that the Queen of Labor has never created a job, we found what Ms. Burger wrote today in the Huffington Post rather fascinating:

Creating jobs isn’t rocket science. We just need the political will, courage and determination to make it happen.

Now it’s time to get to work.

1. We need to extend the safety net, including increasing unemployment insurance and expanding work sharing programs to provide unemployment benefits for reduced hours of work. and

2. We need to use TARP funds to increase credit for small businesses.

3. Federal fiscal relief to states and local governments needs to be expanded to save an anticipated 900,000 jobs and the vital services in our communities.

4. We need to target the fastest-growing sectors of human services such as child care, in-home services for the elderly and disabled, and other services our communities need through a public jobs program. This will create jobs in the public and private sectors and ensure our communities are healthy, educated, and well cared for.

5. We need to leverage private investment with public dollars through a Green Bank that will promote energy-efficiency and renewables as a major source of job creation, in both the short and the long term. The jobs we create today will lay the groundwork for the industries of tomorrow.

Expanding the home retrofitting programs begun under the Recovery Act will
create good jobs in construction and related industries. Including commercial and public buildings would increase the scope of the program, create high skilled jobs, and protect the planet by reducing demand for energy. By acting now, America can lead the way on green technology.

6. We must invest in our aging and failing infrastructure by rebuilding our schools, roads and bridges—putting millions to work. An Infrastructure Bank can foster public/private partnerships in developing regional and large scale projects critical for a 21st century economy.

7. The passage of health care reform will add tens of millions of Americans to the healthcare rolls and create more than a million new and different jobs in healthcare and related industries. We need to ensure our present healthcare workforce is prepared and we need innovative recruitment and training programs to meet this new workforce demand.

8. We must pass the Employee Free Choice Act to once again protect workers’ freedom to form unions and allow them to share in the prosperity of a new 21st century economy.

9. We need expanded worker training programs on a national scale so that young people are prepared for new industries and workers can the learn skills necessary to compete for new jobs. It’s time to coordinate across agency lines and provide flexible lifelong training for the new economy. [Emphasis added.]

Paid for by whom?

Without saying ‘you,’ Ms. Burger’s answer is as any wealth re-distributor’s would be: Tax the rich!

It’s time for Wall Street and the financial industry to pay back their debt to our society. Wall Street must do its part by paying a speculators tax on their obscene profits and transactions. This tax can fund the entire program over ten years.

This isn’t a hard ask. After the trillions in taxpayer investments to bail them out, the excessive profits of firms like Goldman Sachs, and the $150 billion in compensation and bonuses the top six banks plan to dole out this year, this is a small price for Wall Street to pay.

Of course, “Wall Street” is made up millions of “Main Street” investors who have their 401(k)s, their pensions, and their investments in Wall Street.
So, what Queen of Labor is essentially pushing for is a hidden tax on anyone with any kind of investment, covered in the “we’ll screw the rich” blanket.
Given that government can only steal from, expropriate, or tax the wealth of its citizens, it cannot create jobs without killing jobs in the private sector.

In ordinary times, Ms. Burger’s proposals would be laugh-out-loud funny.

However, these are not ordinary times where leaders in Washington understand basic economic principles (which is why there is a job summit to begin with) that, in order for the private sector to be able to create jobs, government needs to get the hell out of the way.

Unfortunately, these are extraordinary times. Our nation has a president whose ear is being bent by the Lord of Labor and his Queen whose only apparent know-how on meeting a payroll is through taking the hard-earned income from working Americans. And, whose only apparent growth plan is through higher taxes, bigger government, and stripping Americans of their right to vote on unionization.