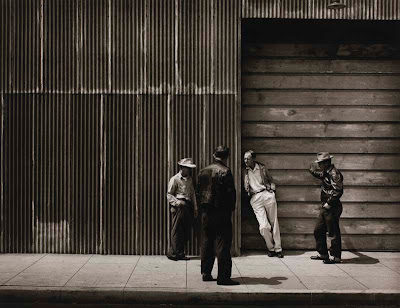 With unemployment reaching 10.2% and likely to rise over the coming year, the Obama administration is getting desperate to show that it can reverse the rising unemployment and the President’s falling poll numbers.

It’s one of the oldest tricks in the presidential playbook: when you want to focus attention on an issue, hold a meeting and call it a “summit.”

Next up: a “Jobs Summit” Thursday, and if Obama thought fighting the flu or getting health reform done was tough, wait until he faces the hard truth that presidents ultimately face when they need an economic quick-fix.

Nevertheless, with much fanfare and photo ops, the President will be holding a jobs summit where he’s invited “business executives, labor leaders, community activists, economists and others to the White House to spur ideas.” [See partial guest list here.]
Interestingly, Bill Clinton’s former secretary of labor and ultra-liberal Robert Reich states: “Most presidents don’t have all that much control over creating jobs. They can affect things at the margin.”
While Mr. Reich is half-correct (Presidents cannot create jobs, nor can government-at-large), he misses a larger point: Presidents and government, with ill-conceived policies, can and do kill jobs.
A near-bankrupt treasury, higher taxes, excessive regulation and uncertainty over big government proposals like health care nationalization and ‘cap and trade’ all have a strangulating on the creators of jobs.
Another piece of legislation that is creating great uncertainty and, therefore, a reluctance to create jobs is the delusionally-dubbed Employee Free Choice Act (or EFCA).
Even though the President, according to AFL-CIO boss Richard Trumka, has pledged to advance EFCA after the health care debate is over, Thomas Kochran suggests in the Huffington Post that the President’s “jobs summit” should be used to push for EFCA.

The president needs to use this historic opportunity to break this impasse and launch an era of productive and innovative labor management relations needed to foster and sustain the new pact.

To do so, the president should announce his intention to work for speedy passage of a reframed and expanded Employee Free Choice Act, a labor law reform bill currently stalled in Congress.

The problem is, EFCA (which, as written, replaces secret-ballot elections on the question of unionization with majority ‘card-check’ and gives government-imposed arbitrators the power to dictate wages and benefits) is a job destroyer.
As renowned Professor Richard Epstein wrote earlier this year:

The likely consequence of EFCA will be to retard the formation of small businesses, as fledgling entrepreneurs will reassess their prospects of success to take into account the danger of derailment at an early stage in the process. In the long‐term the EFCA will reduce the rate of firm formation, and thus deprive the economy of a central driver of new job creation and technology growth.

And for larger firms?

Faced with these constraints, a firm’s ability to shift and meet the rising competition from new firms could easily result in the loss of jobs from the failure of certain business lines, or the conscious redeployment by management of assets and new investment to locations that have lower costs and greater flexibility –traits most often associated with nonunion operations. The decision to send more activities offshore is also a distinct likelihood. 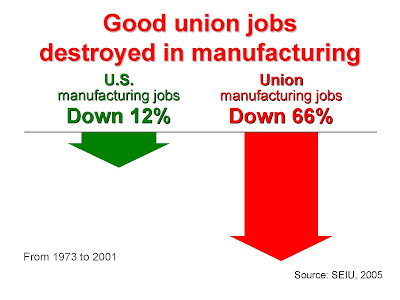 In 2005, even Andy Stern of the now-infamous Service Employees International Union seemed to implicitly acknowledge that unions hurt jobs when he presented statistics on a PowerPoint slide (at right) indicating that manufacturing jobs that were unionized suffered a much higher loss than did overall manufacturing jobs.

More relevant to Thursday’s “jobs summit” is President Obama’s own Larry Summers. Prior to his joining the Obama administration, Mr. Summers seemed to get it.

Just a few years ago, Mr. Obama’s current Director of the National Economic Council wrote that unionization is a cause of long term unemployment.

Another cause of long-term unemployment is unionization. High union wages that exceed the competitive market rate are likely to cause job losses in the unionized sector of the economy. Also, those who lose high-wage union jobs are often reluctant to accept alternative low-wage employment….

There is no question that some long-term unemployment is caused by government intervention and unions that interfere with the supply of labor….

As the meeting of the minds come together on Thursday to hold a photo op and give the appearance they are doing something to try to curb unemployment, perhaps they will get a sudden revelation that they, in fact, may be partly to blame for the high unemployment.
But, then again, the expectation that common sense economics would prevail from an administration that was paid for by union bosses may be asking too much.
__________________________
“I bring reason to your ears, and, in language as plain as ABC, hold up truth to your eyes.” Thomas Paine, December 23, 1776
__________________________
Follow LaborUnionReport on Twitter.
Share
Tweet
Tags: ANDY STERN BARACK OBAMA JOBS SUMMIT SEIU UNEMPLOYMENT
Register Login to Comment
TRENDING