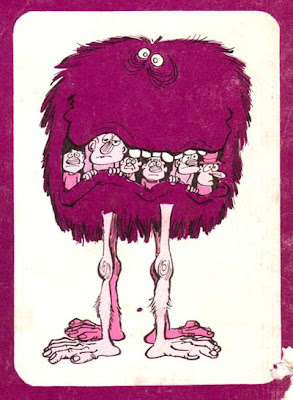 A mere two weeks ago, the Union of Purple People Eaters (aka the SEIU) found itself in the middle of a media maelstrom for picking on a pathway-clearing eagle scout.

In pursuit of an Eagle Scout badge, Kevin Anderson, 17, has toiled for more than 200 hours hours over several weeks to clear a walking path in an east Allentown park. Little did the do-gooder know that his altruistic act would put him in the cross hairs of the city’s largest municipal union.

Nick Balzano, president of the local Service Employees International Union, told Allentown City Council Tuesday that the union is considering filing a grievance against the city for allowing Anderson to clear a 1,000-foot walking and biking path at Kimmets Lock Park.

Within a few days, the offending Purple People Eater had resigned his post after having been thrown under the purple bus by his New York bosses.

On Wednesday, after getting hit by a steady onslaught of rights, Balzano got hit by one big left when his own union distanced itself from his comments and called Balzano’s wounds self-induced.

“His comments were completely unauthorized and they do not reflect the position or views of the union,” wrote area leader of the SEIU’s Mid-Atlantic District Wayne MacManiman in an apology letter to Allentown Mayor Ed Pawlowski.

“The careless and insensitive comments were prompted by frustration over recently laid-off workers in Allentown,” MacManiman wrote Wednesday.

Now, however, in what may be too little too late, the SEIU is trying to make amends for its ill-conceived attack on the eagle scout.

Hauling brush and old tires out of the woods in Allentown early Friday, members of the Service Employees International Union learned an Eagle-Scout-to-be is just as forgiving as he is trustworthy, loyal and helpful.

The Eagle Scout service project of Kevin Anderson, 17, of Upper Saucon Township was caught up in a national media firestorm after Nick Balzano, an Allentown union official, threatened to file a grievance over Kevin’s work clearing a trail in Kimmets Lock Park. Conservative pundits seized on the remark as evidence of the SEIU’s ”thuggery,” and Balzano later resigned.

To show there were no hard feelings, SEIU members from as far away as Philadelphia and New Jersey accepted Kevin’s invitation to help with the project Friday.”They completely agreed — to come out, to help, to make amends,” said Kevin, a member of Troop 301 of Center Valley.

Of course, SEIU bosses wasted no time using their ‘volunteerism’ as a means of trying to get a boost in its PR debacle:

”Everybody’s here on their day off, volunteering,” said MacManiman, of Burlington County, N.J.

He noted SEIU members from Allentown had signed up to be part of the union’s 20-member crew.

Always supported the boy scouts?  Well, “always” may be always except when your union gets caught threatening to file a grievance against one and you, Mr. MacManiman, after throwing the offender under the purple bus for getting caught.
[Editor’s note: It might be a safe bet that a union heavy like MacManiman wouldn’t be picking up branches on a Friday after Thankgiving were it not for the bad PR his union received for picking on the scout to begin with.]
Follow LaborUnionReport on Twitter.
Cross-posted on LaborUnionReport.
Share
Tweet
Tags: SEIU
Register Login to Comment
TRENDING