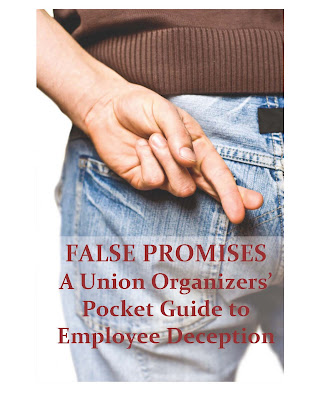 At a time when union bosses are desperately attempting to appear to be on the “up and up” in order to convince lawmakers to pass the delusionally-dubbed Employee Free Choice Act, the New York Times has published an article about the dirty (and what many would likely consider unethical) tactics unions use on workers to convince them to unionize.

Surprisingly, in this case, the whistle blowers are the union organizers themselves. And, according to them, they are as much the victims as the workers they target are.

According to the NYT story, using a tactic called “pink sheeting,” union bosses of UNITE-HERE pressured union organizers to reveal highly personal information about themselves to potential members in order to convince them to unionize.

Ms. Rivera said her supervisors at Unite Here, the hotel and restaurant workers’ union, repeatedly pressed her to reveal highly personal information, getting her to divulge that her father had sexually abused her.

Later, she said, her supervisors ordered her to recount her tale of abuse again and again to workers they were trying to unionize at Tampa International Airport, convinced that Ms. Rivera’s story would move them, making them more likely to join the union.

“I was scared not to do what they said,” said Ms. Rivera, adding that she resented being pressured to disclose intimate information and then speak about it in public. “To me, it was sick. It was horrible.”

The practice of pink sheeting wasn’t just a once or twice occurrence, say the organizers. In fact, the union kept their personal information in a database to pull up when needed.

More than a dozen organizers said in interviews that they had often been pressured to detail such personal anguish — sometimes under the threat of dismissal from their union positions — and that their supervisors later used the information to press them to comply with their orders.

“It’s extremely cult like and extremely manipulative,” said Amelia Frank-Vitale, a Yale graduate and former hotel union organizer who said these practices drove her to see a therapist.

Several organizers grew incensed when they discovered that details of their history had been put into the union’s database so that supervisors could use that information to manipulate them.

“This information is extremely personal,” said Matthew Edwards, an organizer who had disclosed that he was from a broken home and was overweight when young. “It is catalogued and shared throughout the whole organizing department.”

Once the information was catalogued, how did the union bosses use this information on workers?

Several organizers said supervisors wanted this information so organizers could inspire prospective union members by telling them things like, “I suffered sexual abuse or I was an alcoholic, and thanks to the union, I overcame it.”

Numerous organizers said their supervisors, having pink-sheeted them, had in turn ordered them to elicit highly personal information from workers they were seeking to unionize. [Emphasis added.]

…[P]ink sheeting is actually a serious problem in the union. It entails union staff gathering sensitive personal information about the lower-level staff that they directly supervise, as well as unorganized workers and members, in order to discover their personal weaknesses. This information is then used at a later point to “push” them to follow the union’s program if they are resistant. For example (and this is a scenario we have heard about from multiple organizers in different cities), a lead organizer will share personal struggles that they have experienced in their life with a new organizer. The lead will then ask the new organizer about hardships they have experienced. Thinking that their fellow staff is simply opening up to them, the new organizer often shares sensitive information of their own. The information that the new organizer shares is then remembered by the lead (and in many cases actually recorded on a form that was originally pink). Down the line, if the organizer is told to do something on a campaign that they feel uncomfortable doing, the lead will put this information to use. They will bring up the sensitive information to convince the new organizer that, by following the lead’s direction, they are confronting their fears and insecurities and becoming a stronger person, just like when they dealt with personal hardship in the past. While the details of how the practice is used vary, the constant is that emotionally vulnerable information is methodologically gathered on workers and staff. Later, if they express doubt about the union program, it is used to convince them to follow the union’s plan.

This practice is a cynical and manipulative system of control. It creates a cult-like relationship of dependency between staff and their supervisors because staff who are successfully subjected to this come to see their supervisors as playing an important role in helping them develop emotionally.

UNITE-HERE top boss John Wilhelm publicly condemns the practice of pink sheeting but, according to the Times’ story, it may be the practice still exists but only the name has changed:

Mr. Wilhelm said that he was cracking down on what pink sheeting existed. Unite Here leaders issued new guidelines in early 2008 and again in early 2009, in theory banning the practice. But several organizers detailed numerous instances of pink sheeting in recent months despite that supposed ban.

These organizers said the question sheets were no longer pink, had been renamed “motivation sheets” and contained such questions as, “What risks or difficulties has your target undergone in her/his personal life?”

Among the information on several pink sheets was:

“Her childhood was a mess. Her mother was extremely passive aggressive. She would stop speaking to her children sometimes.”

“Has social anxiety disorder. She should have been on medication or in therapy but her parents refused.”

“Mom was not around growing up. She’s heard from her twice. Once to ask for money.”

Of course, as they push for passage of EFCA, union bosses would rather sweep this and other tactics under the rug.

However, as one of EFCA’s main provisions is the removal of secret-ballot elections on the question of unionization, if union organizers can convince a majority of workers to sign union authorization cards using tactics like pink sheeting (or “motivation sheets”), as well as a variety of other tactics, there should be a re-examination of the authenticity of all practices such as these.

The reality is, if unions are permitted to use tactics like this and more, the workers they target are not really wanting to join a union but are getting brainwashed into joining a cult with as much skills and ability to manipulate individuals as Jim Jones had in convincing his followers to drink poison-laced Kool Aid.

Trump Rising
Townhall
'That's how you know they lie on purpose': Glenn Greenwald points out the media's lack of interest in correcting the Hunter Biden laptop story
Twitchy
The Arizona Audit Findings the Media Doesn't Want You to See
Redstate
The 'F*** Joe Biden' Chant Is EVERYWHERE
PJ Media