Let Your Fingers do the Talking: SEIU has 60,000 at Pro-Amnesty Parties 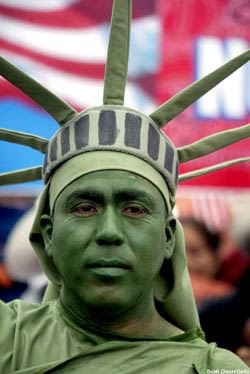 The Purple People Eaters’ union (aka the SEIU), one of the main pushers of nationalized health care, denying secret-ballot votes on unionization, and amnesty for illegal aliens participated in a big town hall on Wednesday to push for “a pathway to citizenship for the 12 million undocumented people currently living in the United States.”

According to event organizers and the SEIU, the event involved 60,000 pro-amnesty activists. From the SEIU’s site:

Differing from past years, the Reform Immigration FOR America Campaign is already building a field movement that outnumbers and outpaces the other side. Last weekend, the controversial “Tea Party” anti-immigrant activists held a meager 50 events in 26 states that they themselves acknowledged were “not drawing huge crowds.”

Well then. Another taunt from the purple puds.

Following this weekend’s beating of anti-amnesty camera carriers, it seems the SEIU and its cohorts are spoiling for a fight.

Instead of stepping into the gutter with the purple behemoth, perhaps energy would be better spent contacting the people who will be bowing to purple pressure. You can go here to find them.

Woke Is Everywhere: University of Alabama Prefaces Each Play With a 'Diversity Statement'
Alex Parker