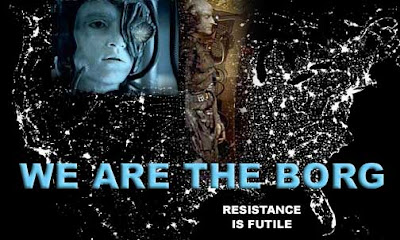 Like the Borg on Star Trek, the Purple People Eaters Union, otherwise known as the Service Employees International Union (or SEIU) has much to gain with the nationalization of America’s health care.

As guest columnist Kevin Troutman noted on Friday in the Houston Chronicle:

The House resolution establishes a scenario that would effectively exclude non-union employers from eligibility to work on program-funded contracts. It also requires participating health care providers to pay wages and benefits that have been collectively bargained or that union-friendly appointees determine are competitive. This is plainly a move toward coerced unionization. With guaranteed seats at the table, unions are poised to control many newly formed oversight posts and/or committees, formed in connection with new employer mandates and cooperative health care associations.

Yet another provision would establish lucrative state training partnerships that contain little or no opportunities for non-union employee organizations. Provisions in Senate proposals would exempt union-negotiated health care plans from taxes on “Cadillac” health plans.

According to Big Government’s Liberty Chick, it would appear that the SEIU is reaping its reward for the dollars it has poluted the political landscape with.

From 2000 to current, SEIU has spent at least $187,500,000 through combined lobbying, PAC and 527s group donations and expenses on candidates and policy issues – nearly 100% of which went to Democrats and to liberal policy initiatives. Much has been focused on influencing universal health care, as well as other indirectly related health legislation, such as public nutrition, food safety, research, and environmental health – all part of SEIU’s supposed plan for Building a New American Health Care System. Because, in their words, they “will not stop until every man, woman and child has quality, affordable care they can count on.”

…And, of course, every health care worker is unionized.

This New Peer-Reviewed Article Could Be a Game-Changer
Townhall
'Parents' rights' a centerpiece of a GOP that is increasingly hostile to public education and democracy
Twitchy
Trump Makes It Clear He's Running, Lights up Georgia Rally on Biden, Durham and the Audit
Redstate
It Gets Worse: Look Who Worked Together to Frame Donald Trump With Fake Russia Hoax
PJ Media