They're Baaack! Here Comes the Debate on Illegals 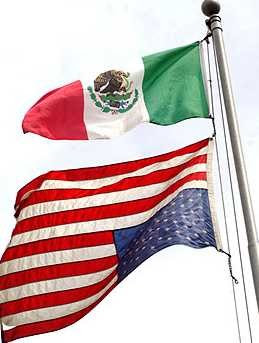 To say they are good at multi-tasking would be an understatment, as the White House agenda just keeps getting busier and busier with…

The Obama administration will insist on measures to give legal status to an estimated 12 million illegal immigrants as it pushes early next year for legislation to overhaul the immigration system, Homeland Security Secretary Janet Napolitano said on Friday.

In her first major speech on the overhaul, Ms. Napolitano dispelled any suggestion that the administration — with health care, energy and other major issues crowding its agenda — would postpone the most contentious piece of immigration legislation until after midterm elections next November.

Laying out the administration’s bottom line, Ms. Napolitano said officials would argue for a “three-legged stool” that includes tougher enforcement laws against illegal immigrants and employers who hire them and a streamlined system for legal immigration, as well as a “tough and fair pathway to earned legal status.”

With unemployment surging over 10 percent and Congress still wrangling over health care, advocates on all sides of the immigration debate had begun to doubt that President Obama would keep his pledge to tackle the divisive illegal immigration issue in the first months of 2010.

Speaking at the Center for American Progress, a liberal policy group in Washington, Ms. Napolitano unveiled a double-barrel argument for a legalization program, saying it would enhance national security and, as the economy climbs out of recession, protect American workers from unfair competition from lower-paid, easily exploited illegal immigrants.

“climbs out of recession”…?  How about ‘puts us in a depression’?

The one thing the President was correct on:  ObamaCare would not include illegal aliens.  The reason is, he’s going to legalize them.