UFCW Local Threatens Its Own Staff Union With Layoffs! 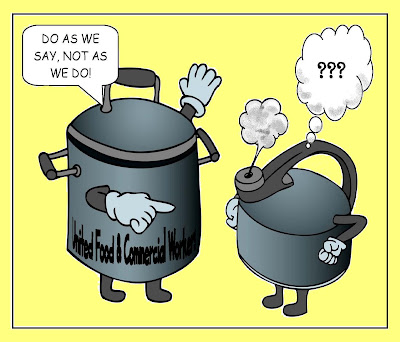 From the Hypocritical Union Department.

With its top officers raking in $177k and $145k, respectively, members of the United Food & Commercial Workers, Local 5 members had their dues increased on them earlier this year.

Now, with its financial house in disarray, the union is going to its own unionized employees and looking to open its contract with the staff union.

According to a letter sent to the staff union F.A.I.R., if the UFCW leadership cannot convince the staff unions to re-open their contracts, the union threatens that “Local 5 will have no choice but to implement severe budget reductions that will include layoffs in each of our bargaining units and a reduction in service to our members.”