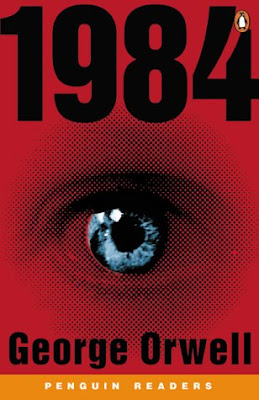 Propaganda, according to Dictionary.com, is the “information, ideas, or rumors deliberately spread widely to help or harm a person, group, movement, institution, nation, etc.” and “the deliberate spreading of such information, rumors, etc.”

Over the last several years, big union bosses have been using spent hundreds of millions of dollars buying politicians to push a delusionally-dubbed bill called the Employee Free Choice Act (or EFCA).
Simply put, EFCA is made up of three components:

Throughout the unions’ campaign to use the government to boost their sagging membership, unions have used a variety of propaganda techniques to try to make the bill sound more attractive.
First among the tactics is “doublespeak” and is found in the bill’s name itself–the “Employee Free Choice Act.”
Doublespeak is “language deliberately constructed to disguise its actual meaning, such as euphemisms. “
Take, for example, the AFL-CIO’s argument for EFCA:

Giving working people the freedom to form unions and bargain collectively is key to turning around the economy and rebuilding America’s middle class.

The above statement implies that workers should be able to “form” their own unions and do their own bargaining. This is misleading. Union bosses would not have spent hundreds of millions of dollars only to have workers form their own independent unions. Their real goal is to drive up their own falling memberships.
This too could be considered an example of doublespeak.
Another example of propaganda is called “The Big Lie.” The Big Lie, often attributed to Nazi propagandist Joseph Goebbels, is the practice that “if you tell a lie big enough and keep repeating it, people will eventually come to believe it.”

Here is another example from the AFL-CIO:

Too few workers are able to form unions and bargain because companies routinely block their efforts—and our current legal system is too broken and dominated by corporations to help them.

The reality is, unions win over two thirds of all NLRB elections which are conducted by secret ballot. Yet, unions want to do away with the secret ballot. The AFL-CIO’s statement above could be considered utilization of both, the “Big Lie” technique, as well an ad hominem attack on “corporations.” 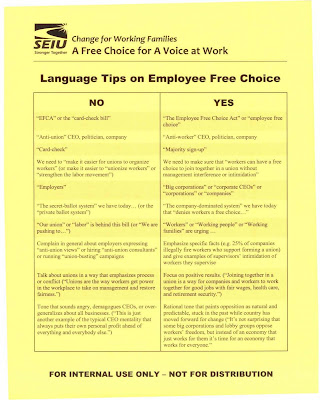 At right is a language ‘Tip Sheet,’ prepared by the SEIU for EFCA-pushers to put the ‘union spin’ onto explaining the Orwellian legislation.

Here are a few examples:

Avoid Talk about unions in a way that emphasizes process or conflict (“Unions are the way workers get power in the workplace to take on management and restore fairness. “)

But use Focus on positive results. (“Joining together in a union is a way for companies and workers to work together for good jobs with fair wages, health care, and retirement security.”)

The SEIU, like other so many other unions, is skilled in the art of propaganda and the internal memo proves this fact.

Unfortunately, at some point in the near future, union bosses may actually succeed in getting their political cronies in Washington to pass the oxy-moronic Employee Free Choice Act. However, if they do succeed, it will only be through using propagnda techniques that go back decades.