The SEIU & Its Pattern of Purple, Black & Blue Persuasion 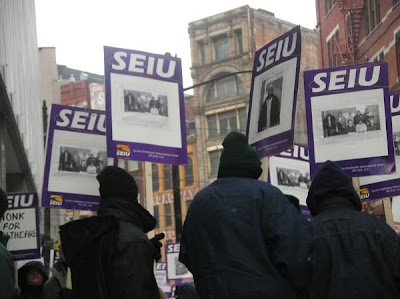 The Purple People Eater, otherwise known as the Service Employees International Union (or SEIU), has made national news of late with its alleged beating of Kenneth Gladney and, more recently, the alleged beating of state worker Ken Hamidi.

These incidents are only now entering the public consciousness. However, they are only two of many more other incidents that tarnish the public image the SEIU likes to paint for itself.
Last year, amidst an inter-union fight between the SEIU and the California Nurses Association , the SEIU orchestrated a protest against the CNA’s Executive Director at a labor conference which turned violent, leaving one SEIU member dead from a heart attack.
A few years ago, during one of its efforts to unionize some workers, the SEIU was charged with a multitude of allegations by an employer:

On or about April 22, 2005 to the present, the Union violated employees’ rights under Section 7 of the National Labor Relations Act by:

Of course, this latter example is a mere illustration of why the SEIU (and other unions’) push for the hallucinogenically-named Employee Free Choice Act (or EFCA) is destructive to employee rights.
[To view more charges filed against the SEIU at the NLRB, go here.]
[To read more about the oxy-moronic Employee Free Choice Act, go here.]
Cross-posted on LaborUnionReport.
Follow LaborUnionReport on Twitter.