After the Uninsured, Union Members Will be Among the First to Get Dumped on the Government's Health Plan 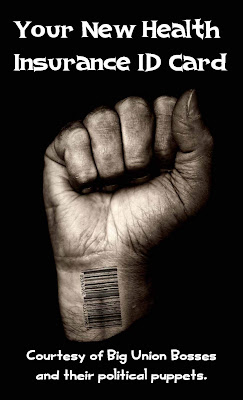 As the old saying goes: Be careful what you wish for, because you might just get it.

Unions have been pushing for decades to get government-run, single-payer health care while, in the meantime, negotiating “rich” health benefit plans for their members.

While labor chieftains, like AFL-CIO’s top boss Richard Trumka have gone ‘all in’ for the public option, it will be the union members’ current health benefits which will be among the first to get negotiated away and dumped into a public plan.

As their leaders like to brag, many union members have some of the richest (read most expensive) health plans available on the quasi-free market.

If the union bosses have their way and a public option is passed, those “rich” plans will become a negotiating point for employers to negotiate away those expensive plans in exchange for the public option.

Union negotiators, having gone on record supporting and fighting so hard to pass such a plan, will be hard pressed with both their members and their employers to come up with an argument that is not hypocritical if they try and fight an employer demands not to utilize the public option.

This will be more the case if an employer is in a competitive market like the grocery industry, where there is tremendous cost pressures from non-union competitors.

Basically, it all comes down to simple economics.

If a public option tax is a mere eight percent of an employer’s payroll, and the employer is currently paying 15 percent or more for health benefits (as many companies currently do), a savvy negotiator would think nothing of offering a three or four percent increase in exchange for dumping the union members onto the public plan.

Given that the vast majority of union contracts are re-negotiated every three years, we can bet that in the first three years that the public option kicks in, the majority of union members who have their employer plans will get dumped on their rather quickly.  After all, it is what the union leaders want, is it not?

It’s too bad that union members don’t realize that, after the uninsured and the illegal immigrants, they’ll be on the list to be dumped.

Oh well. In their case, they’ll reap what their leaders have sewn.