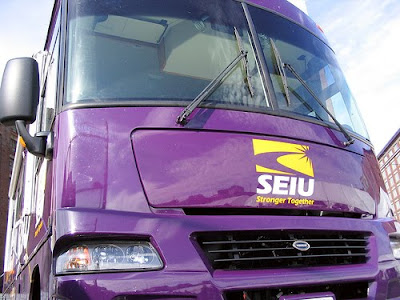 He’s been called, rightly or wrongly, the hand inside Barack Obama’s puppet. One thing is certain, however, Service Employees International Union president Andy Stern has a lot of sway with Barack Obama’s White House.

In fact, even as President Obama was nominating SEIU-radical lawyer Craig Becker to the National Labor Relations Board, the Wall Street Journal reports that SEIU’s Stern visited the White House some 22 times from January to July, more than anyone else on the White House visitors log.

But the White House said those aren’t the guys you’re thinking of. Nor is the log complete.

So, how much pull does Mr. Stern and his purple-clad comrades have in the White House?

Last June (and perhaps before), the SEIU launched its campaign against the US Chamber of Commerce, largely due to its opposition to the job-destroying and delusionally-dubbed Employee Free Choice Act.

As its anti-corporate corporate campaign against the Chamber has progressed over the summer, it has included such Alinsky-like campaign slogans as “Turn off the Lights at the U.S. Chamber of Commerce.”

It is well known that the SEIU has put high-ranking union leader Dennis Rivera has been workinghand-in-glove on President Obama’s plan to nationalize health care through the so-called “public option.” However, it is still rather disturbing how closely the White House follows the SEIU’s lead.

Earlier this month, in what many view as a ‘war on free speech,’ the White House entered the fray, joining the SEIU in attacking the Chamber of Commerce before giving the appearance of easing up when it drew criticism for creating an ‘enemies list.’

While it is one thing for a candidate running for president to pledge allegiance to a particular group (as then-candidate Obama did to the SEIU), it is quite another for the President of the United States to let someone else drive the bus, as the rest of America is shoved to the back.