WHO BLEW IT? An Anti-Business State and 'Fighting Machinists' Lose Bout for Boeing Jobs

The months-long, cross-country suspense over which state gets the new 787 Dreamliner production line is finally over. 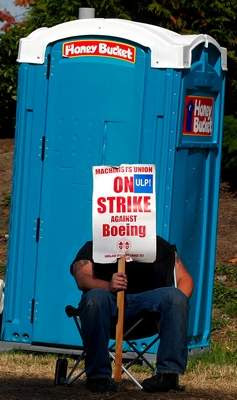 The Boeing Co. has finally reached the conclusion to locate its second production line for the new 787 Dreamliner in South Carolina, far away from what many view as the anti-business climate in Washington State.

While the decision is not sitting well with the International Association of Machinists, the union should not be too surprised either.

In September, the union was overwhelmingly decertified at Boeing’s facility in South Carolina and, based on press reports, Boeing may have finally tired of its acrimonius relationship with the “Fighting Machinists.”

The union was willing to extend its current four-year contract by another eight years, ensuring no strikes through at least 2020, to secure the 787 work, Rich Michalski said. Instead, Boeing shut down talks two days before its Oct. 26 board meeting and announced Oct. 28 that it would open a plant in the southeastern U.S. state, the first time it has built a commercial-aircraft assembly line outside the Seattle area.

“They won’t ever get us to commit like that again,” Michalski said in an interview last night. “That’s over.”

While this sounds like the drum beats of war for Boeing in their next round of negotiations in 2012, the IAM may want to think twice before edging itself out of additional opportunities.

Pro-union commentator and UC Berkley professor Harvey Shaiken adds: “The risk for Boeing is, moving to South Carolina does not solve its labor issues with the IAM; if anything it adds a troubling new layer to them.”

Despite the IAM’s pledge not to strike, however, it appears that the IAM didn’t leave much choice for Boeing.

Boeing says the IAM “demanded new planes be built here [in Washington], offered only an eight-year no-strike guarantee and wanted a gold pass to organize everyone and everything in the company.”

Of course, that was in addition to three percent increases every year for another eight years following the 2012 expiration of the union’s current contract.

A Parade of Noise-Making Machinists

It also appears that dealing with the Machinists’ union and its apparently constant antagonism may be a bigger driving influence behind Boeing’s decision.

Matt Gettmann began working in finance at Boeing Co. last year, and it wasn’t long before he found himself watching, stunned, as union members prepared for what became an eight-week strike.

The work stoppage cost the company billions in deferred revenue and caused some of the delays in production of its new 787 at a time when Boeing was growing increasingly frustrated with labor squabbles.

“There would be a parade of people, thousands and thousands of them, making noises and screaming” — right in the factory, Gettmann said. “That’s the employee-employer relationship? It’s shocking.”

“This looks very much like a company that’s tired of dealing with this union, and they’ve found a way out,” said Richard Aboulafia, an analyst with Teal Group. “The union needs to put aside the concept of who’s right and who’s wrong, and look at who’s winning and who’s losing. This is not going well from their perspective.”

Now that would be an understatment!
Boeing, Boeing…Gone?
Time will tell if Boeing shifts more of its production to more labor-friendly locales, but for the IAM in Puget Sound and Washington State offcials, this should serve as a wake-up call:
Chasing business away with anti-business regulations and unrealistic union demands is not being ‘pro-worker’–especially when it causes jobs to be lost.
Cross-posted on LaborUnionReport.
Follow LaborUnionReport on Twitter.
Share
Tweet
Register Login to Comment
TRENDING