UPDATE: As a follow-up to our post below, Bloomberg adds to the government’s fuzzy math with this:

Actual hiring seems to be lagging behind the model’s land of make-believe. For small businesses, which are the source of most job creation in the U.S., the government’s increased and changing role in the economy isn’t a confidence builder. Businessmen have no idea what health-care reform will mean for their cost structure or what whimsical tax policies the government might impose when it realizes those short-term deficits are running into long-term unfunded liabilities.

No wonder capital spending plans were at an all-time low in the third quarter, according to the NFIB monthly survey. 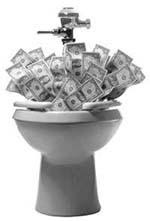 The White House overstated the amount of jobs the $787 billion stimulus package passed earlier this year has ‘created’ or saved,’ according to an AP report.

The government’s first accounting of jobs tied to the $787 billion stimulus program claimed more than 30,000 positions paid for with recovery money. But that figure is overstated by least 5,000 jobs, according to an Associated Press review of a sample of stimulus contracts.

The AP review found some counts were more than 10 times as high as the actual number of jobs; some jobs credited to the stimulus program were counted two and sometimes more than four times; and other jobs were credited to stimulus spending when none was produced.

– A company working with the Federal Communications Commission reported that stimulus money paid for 4,231 jobs, when about 1,000 were produced.

– A Georgia community college reported creating 280 jobs with recovery money, but none was created from stimulus spending.

– A Florida child care center said its stimulus money saved 129 jobs but used the money on raises for existing employees.

There’s no evidence the White House sought to inflate job numbers in the report. But administration officials seized on the 30,000 figure as evidence that the stimulus program was on its way toward fulfilling the president’s promise of creating or saving 3.5 million jobs by the end of next year.

[Emphasis added.]
Wow! Given that there are only two months to go before the end of the year, there are only 3,475,000 jobs that need to be saved or created by Jan. 1.
Another way to look at it is that we taxpayers spent $31,480,000 for every job that was allegedly “created or saved.”
Follow LaborUnionReport on Twitter.
Share
Tweet
Tags: WHITE HOUSE
Register Login to Comment
TRENDING