It’s noteworthy when one of America’s most ardent and well-known union supporters employed by the federal government gets picketed and accused of hypocrisy by her own union staff. And that is exactly what happened to former union attorney and current National Labor Relations Board Chairman Wilma Liebman last Wednesday.

On Wednesday, NLRB Chairman Liebman spoke at San Francisco’s posh Hotel Kabuki on developments in labor law. Upon her arrival, however, she was greeted by her own employees’ staff union, the NLRBU, who were picketing, leafletting, and urging attendees to boycott the event. [That’s right, the employees (who hear private-sector cases) at the National Labor Relations Board are unionized!] 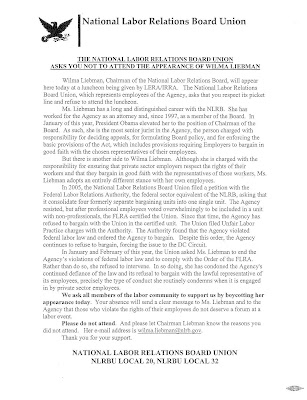 A copy of the NLRBU’s flyer, as well as a report on the event, was forwarded along to us.

The flyer (at right) is interesting in the fact that the union which represents the staff at the NLRB (the agency ostensibly established to be ‘neutral’ in the administration of the law regulating private-sector relationships between unions and management) is using the tactics that its brethren in the private sector use on employers.

Here is some of the verbiage [with emphasis added] from the NLRBU’s flyer:

an accusation of a two-faced NLRB chairman…

But there is another side to Wilma Liebman. Although she is charged with the responsibility for ensuring that private sector employers respect the rights of their workers and that they bargain in good faith with the representatives of those workers, Ms. Liebman adopts an entirely different stance with her own employees.

In January and February of this year, the Union asked Ms. Liebman to end the Agency’s violations of federal labor law and to comply with the Order of the FLRA. Rather than do so, she refused to intervene. In so doing, she has condoned the Agency’s continued defiance of the law and its refusal to bargain with the lawful representative of its employees, precisely the type of conduct she routinely condemns when it is engaged in by private sector employees. [sic]

Our thanks to our sources for providing us with the above intel.