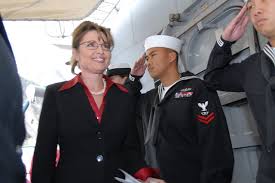 This is a repost of a comment I just made in Pejman’s front page article, adding the following

I think John McCain made one of the best VP choices in this or any other century by choosing Sarah Palin to be his running mate. He’s right — he had a deep base of talent from which to choose, but the Maverick picked a game changer also: and one who will change the game in a good direction. I’m impressed with Palin personally and in her public service. She’s very well-spoken but she also connects with people, she has a terrific family, and it doesn’t hurt that she’s easy on the eyes. All the naysayers and Bolshevik dwarves can suck on a pickle, to paraphrase Robert Reich.

Flash poll down at the convenience store in my little town in the wilds of midwestern Massachusetts:

People from both parties like Sarah Palin. Women and men, across an age range spanning 40 years, and both parties, everyone was a little surprised and receptive to McCain’s choice. Some of the comments:

“She’s someone real and she’s worked hard in Alaska.” — Democrat, male, age 50.
“I think it’s great that she has five kids and has been able to do everything she has.” — Democrat, female, age 35″From what I understand, she’s smart and she’s a fighter, and she’s self-made. I think it was a great choice. She’s a good person.” – Me, Republican, Male, age 38.

My town is a fairly evenly divided mix of R and D, a bit of an odd demographic for Massachusetts. We’re semi-rural but the town has grown quite a bit in the past ten years. Property values here range from under $100,000 to more than $1.5 million dollars. We have hunters and sportsmen, businesspeople on vacation, laborers, and many people who run their own companies.

I didn’t hear a single bad thing said about the woman in the fifteen minutes I spent talking with my neighbors yesterday, after everyone had learned of the choice.

However much the Obama people will try disingenuously to dump on Sarah Palin over experience and her looks, anyone who listens to her speak or has read her life story is impressed by her story and her style. She connects with people: everyone I spoke to used words like “genuine”, “real”, “honest”, “hard working.”

BTW one of the people who was happily surprised was a guy who had heretofore been a solid Obama vote — he said point blank that he thought McCain’s VP choice was better and he was seriously thinking of changing his vote.

Ok so there’s my biased and informal poll. I can say this: I can’t think of another VP nominee choice that John McCain might have made who could have gotten that kind of bipartisan, wide support and admiration. Nobody. It was a genuine “Kumbaya Moment” standing in line at the cash register, and the smiles and mutual agreement were sincere.

McCain has chosen very well indeed if the reaction in my little town is anything to judge by. Let’s inaugurate Vice President Palin and talk more about her. Everyone knows my recent advocacy here has been in support of the 2nd Amendment. Palin was a very reassuring choice to me vis-a-vis 2nd Amendment rights. From the WSJ:

Palin, a lifetime member of the National Rifle Association, is also popular among gun rights activists. Sandra Froman, who sits on the NRA Board of Directors, touted Palin as an “outstanding” selection and that gun rights activists would be “energized” with her on the ticket.

And they are, at least this one. Froman was an exceptional President of the NRA and I’m extremely pleased with Palin’s record. She reminds me of some of the women I grew up with during my experience in high school as Captain of our gender-integrated, undefeated and national-championship winning competition rifle team. She’s a grand slam choice in my book, and people here know I’m not easy to please.