When In Rome, Do Whatever the Taxpayers Will Pay For 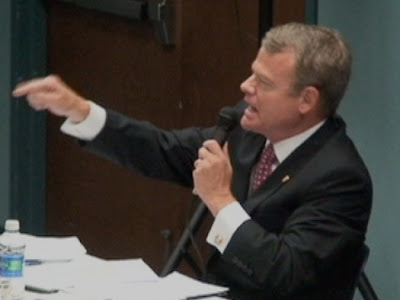 Hailed conservative Democrat by both the local left and the right, Representative Mike McIntyre is away in Rome this week on a trip funded by tax-payer’s dollars. Roughly $70,000 for the 3 day weekend in Rome plus other expenses for the remaining duration of the 7 day excursion where they will visit other European capitals, including Moscow, which ranks #15 in BusinessWeek’s Most Expensive Cities of 2010 and #14 in The Most Expensive Places To Live In The World from earlier this month.

It should be made clear that this trip doesn’t include only McIntyre but also his wife. It also includes Theodore Deutch (D-Fl) and wife, Ruben Hinojosa (D-Tx) and wife, Tom Marino (R-Penn), Dan Burton (R-Ind) and wife, and non-voting Guam member Madeleine Bordallo (D-Guam) .

The official purpose for this trip is to evaluate “foreign operations of the United States” as well as to “examine the European financial crisis.” However some discredit this as being the true purpose. Some are saying that this trip may be connected to the 29th anniversary that Dee and Mike McIntyre will celebrate while in Rome.

In a statement from Ilario Pantano’s office, congratulations were issued to the congressman and his wife regarding their wedding anniversary, as well as an eencouragement to “send out a thank you note to all of the taxpayers of Southeastern North Carolina for footing the bill for his trip to Rome and his anniversary celebration.”

McIntyre released a video on his YouTube account on June 2nd of this month championing his own vote against the increasing of the debt ceiling and advocating for spending cuts. In his tele-townhall, McIntyre stated that he “very, very much agrees” with a caller who stated that the government needs to raise taxes on the “rich” in effort to satisfy debt incurred by the government. It seems as though Representative McIntyre’s opportunity to run as the “conservative” candidate in 2012 are drying up.

CNN Released Asinine Pro-Vaccine Headline Then Tried to Memory Hole It, but the Internet Is Forever
Brandon Morse