Carolina PeaceMaker & "The Conspiracy to Steal the 2012 Election": A Rebuttal 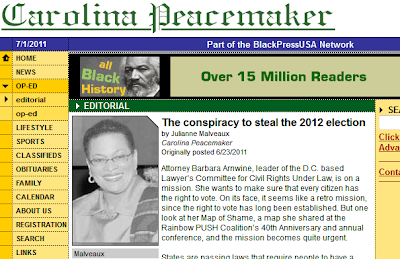 Today I was in the process of putting together a video for the site and was finding more sources when I came across an editorial I wanted to look into. I read through the editorial “The Conspiracy to Steal the 2o12 Election” written by Julianne Malveaux of Carolina Peacemaker. The editorial has been posted all across the country, stretching to Seattle and being hosted in prominent publications such as . Of course the piece is toted across Black News outlets and Rainbow Coalition websites, directly referring to the Rainbow PUSH Coalition in the first paragraph.

The piece is addressing the issue of Voted ID which is strongly supported by 75% of the North Carolina population.

The article also argues that Americans have a mobility rate of 14% (which according to the Census Bureau is generous by almost 2%) and that the black community has a mobility rate of 18%. The argument then ensues that “many do not return to the Department of Motor Vehicles to change the address on their driver’s license.” Well, according to the Department of Motor Vehicles website, it is the law that you “must notify DMV within 10 days of changing your address” and that “there is no charge to change your address.” So Malveaux’s argument is for the benefit of those who are essentially breaking the law. Also, the DMV provides a service where they will notify the Secretary of State regarding voter registration.

The editorial continues to argue that in most cases the only forms of identification that are allowed are driver’s licenses and passports. This is where Julianne clearly shows that she hasn’t researched the bill but is just regurgitating information from other people who don’t know what they are talking about. The North Carolina Bill would allow the use of North Car­olina driver’s license, a spe­cial DMV ID card, an iden­ti­fi­ca­tion card issued by a state or fed­eral agency, a U.S. pass­port, a gov­ern­ment employee ID card, a U.S. mil­i­tary card or a tribal iden­ti­fi­ca­tion card. If an individual couldn’t afford the $20 that it costs to receive a DMV ID card, then the state would issue a Voter Identification Card, which would allow them to vote.

She continues on to argue that the implementation of Voter ID would cost millions of dollars. Regardless of the current debt to the system, in my opinion, it is 100% more valuable to reassure the American people and the North Carolina voters that the voting system is effective and credible. Any argument against Voter ID is an argument against securing the credibility of that which Thomas Paine referred to, saying “The right of voting for representatives is the primary right by which other rights are protected.”

I challenge Ms. Malveaux to have a conversation with me whereby we will address the issues of Voter ID addressing the facts rather than liberal talking points that are intended to fear-monger people into voting for the left. We can leave partisan politics out of the equation and specifically discuss this issue.

The FAA Approves Media Drone Flights After Being Embarrassed by Texas DPS
Townhall
AUDIT UPDATE: Settlement reached over routers between Maricopa County and the Arizona State Senate
Twitchy
Ted Cruz Has a Question on the Droning of an Afghan Aid Worker That Must Be Answered
Redstate
Contradictions Gone Viral
PJ Media