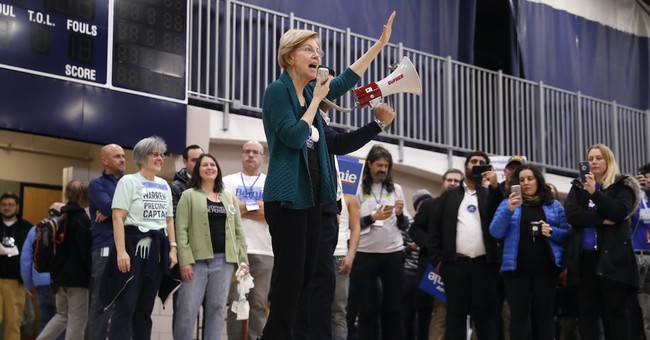 I did not write the title of this article. Rather, I copied it from the title used by Amanda Marcotte in her soulful and heartbroken lament that Senator Elizabeth Warren (D-MA) failed in her effort to secure the 2020 Democratic presidential nomination.

Even though it was expected after her disappointing showing on Super Tuesday, it somehow still felt like a gut punch when Sen. Elizabeth Warren of Massachusetts formally withdrew from the presidential race on Thursday. After giving it some thought, I think I know why: Because this time, there is no other explanation than raw, unvarnished sexism. It just can’t be anything else.

“If Warren was a man, this would be over by now,” is a statement so painfully true that it became a cliché the moment it was first uttered.¹ And yet it somehow failed to capture the scope of the unfairness that greeted Warren on the campaign trail — the way she was held to impossibly high standards, met them, and still saw male competitors who met much lower standards keep scaling past her in the polls.

Warren is a slight woman, but always feels like an outsized presence. Her towering intellect, her quick wit, her ability to crush small men like Mike Bloomberg² with just her words, her skill at explaining complex ideas simply without dumbing them down, her deep well of compassion that is the thing that drove her into politics in the first place: All of this made her shine so much brighter than her counterparts on the debate stage.

Americans apparently couldn’t see that she is a once-in-a-generation talent and reward her for it with the presidency. That is a shameful blight on us. She wrecked Bloomberg in the debate and, in the process, may well have spared us from seeing a presidential election purchased by a billionaire. We responded as we so often do for women who go above the call of duty: We thanked her for her service and promoted less qualified men above her.

In all of that, Miss Marcotte is proclaiming her admiration for Senator Warren’s talent and accomplishments, the policy wonk’s appreciation for another policy wonk. In that, she was hardly alone, as Jess McIntosh and Jessica Valenti Golis and uncounted others whose writings I have not read have done. The New York Times gave Sarah Smarsh space to write “I am burning with fury and grief over Elizabeth Warren. And I am not alone.” In the end, there was only one thing that mattered to them, the sex of the candidate.

Mrs Golis wrote, concerning voting for Hillary Clinton in the Democratic primaries in January of 2016:

There is nothing wrong or foolish in thinking about a candidate’s gender in an election. It is politically savvy to vote for your interests. . . . .

Electing women into office is important for women’s equality, and it’s also crucial for our country’s health. Considering that truth in the election booth is not caring about a “single issue” – it’s voting smart.

Miss Marcotte, on the other hand, was more vitriolic:

But at the end of the day, all this — the sexual violence, the sexist insults, the stripping of reproductive rights, the tearing down of even the brightest of stars, if they happen to female — comes down to a blunt, grotesque desire to keep women subservient to men.

Emphasis in the original.

Senator Warren had an equal, and in some ways, more than equal chance. She was better financed than some of the other also-rans, and had a stronger campaign organization. She peaked early — perhaps too early — in the fall of 2019, and due to that she was the beneficiary of more, and more  positive, media coverage. She left many of the other Democratic contenders, male and female alike, in her dust, as most of them faded out even before the Iowa caucuses. Everything she could have hoped would go her way was going her way.

But there was a problem, a big problem. Despite Miss Marcotte’s, and others’, proclamations that Mrs Warren was the absolute perfect candidate, as David Bahnsen noted in National Review, she had an honesty problem:

Warren fell apart not because of her agenda but because her utter dishonesty about her personal life eroded her credibility as policy wonk. Her decision to double-down when called on lying about her Native American ancestry, her debunked allegation that she’d been fired from a school job for being pregnant, and her false claims that her kids had never attended private schools all shattered her persona as a thought leader and ideologue. Her personal opportunism, as well, made it easier to argue that her platform was opportunistic. So when voters got to pick between Sanders’s socialism and Warren’s, the choice became very easy.

That, of course, is one thing, but perhaps not the bigger problem for her. After all, President Trump has played fast-and-loose with the truth himself, and his supporters just don’t care. But President Trump has something that Hillary Clinton and Elizabeth Warren do not have: charisma. This is something that the policy wonk feminists simply don’t understand. Mrs Warren had an equal chance, with the money and the time and the organization to press the flesh in the very personal politics of the Iowa caucuses and New Hampshire primary, meeting potential voters up close and personally, something she apparently did almost tirelessly, despite being 70 years old.

All of those people she met, all of those opportunities she had to persuade people who met her to vote for her, secured her a third-place finish in Iowa and fourth place in New Hampshire. When all of those early voters looked at and compared the candidates, Mrs Warren was simply not their first choice. When Stupor Tuesday came around, Mrs Warren’s fortunes were fading, but, most tellingly from the perspective of those who have argued that a candidate’s sex should be considered when voting, Mrs Warren received just 15% of the votes from women.

Mrs Golis told us directly, and Miss Marcotte and others less so, that it was perfectly legitimate to consider a candidate’s sex when deciding for whom to cast your ballot. That must mean, inter alia, that it is completely legitimate for people to factor in that a candidate is male? This saw cuts both ways. Would it not be perfectly legitimate, under Mrs Golis’ formulation, to vote against Pete Buttigieg because he is homosexual? I’m certain that the left would decry such a thing, but we have these prominent leftists telling us that such considerations are perfectly valid . . . when taken in the direction they like.

Miss Marcotte was certainly right in her article title: we did not deserve Elizabeth Warren. Her dishonesty was rampant and her policies ill-considered and horrible.

But, let’s tell the truth here: we don’t deserve any of the Democratic candidates.
_____________________________
¹ – In this, Miss Marcotte is quoting herself, though shew didn’t credit it, and is now claiming it is self-evidently true.
² – Is Miss Marcotte taking a cue from we wicked conservatives and trashing Mr Bloomberg based on on his accomplishments or political positions, but his height? 🙂
_____________________________
Please visit my Red State story archive for more of my articles.
My personal website, The First Street Journal, includes articles not necessarily in Red State’s paradigm.
You can follow me on Twitter.