The Cancun global warming convention heard the Dominican vice president say rising water level in Haiti’s Lake Azuei was a sign of global warming which requires billions to remedy and for which nations (Americans) must pay.

Below is satellite view of Dominican Republic/Haiti border. The Haitian part on the left shows complete deforestation while the Dominican side is lush and green (Jan. 2010). 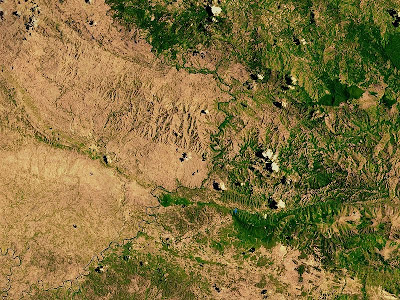 Rising water level in Lake Azuei is due to Haitians routinely removing trees from the area and their government’s failure to stop such actions. Even if man made global warming existed, it would not be the problem with Lake Azuei, nor of the thousands who suffer in Haiti. Americans have given a lot of money to Haiti over the years, it’s too bad it wasn’t put to good use. From the NY Times:

12/14/09: “Meanwhile, as the illegal charcoal trade exacerbates tensions between the two countries (Haiti and the Dominican Republic), the ecological damage done to Haiti’s landscape threatens to pull the neighbors further apart in another unexpected way.

The original road already lies 2 feet below the water line, but the government has been piling sand on top of it to keep the critical passage open. The lake is rising still.

The government is considering reforesting the hillsides to halt the erosion and dredging the lake and a drainage canal, but thus far, its best hope for a permanent solution is a plan to build a new road on the north side of the lake. That project would cost at least $40 million, and there is no source of funding yet.”…

Albuquerque predicted that if not put in place concrete actions to reduce global warming, in a relatively short time the rise in sea level.

Cited the unstoppable rise, so far unexplained by scientists, the water levels of

located in the southwestern portion of the island, growth that has taken tens of thousands of jobs agricultural land and has displaced hundreds of families in the region….

We strongly urge the developed countries to assume

that allow us, in 2011, acting under a new and effective global climate regime, “ said Albuquerque.”…

and the need for billions (from broke Americans) to fix it. Others have used the idea, as below, 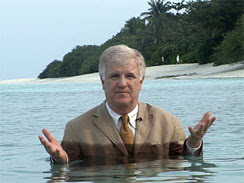 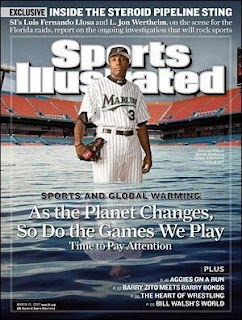 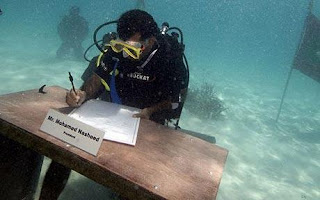 11/2/2009, from the NY Times: “Last month, the cabinet of Maldives donned scuba gear and held an underwater meeting to highlight the threat of global warming to that nation, the world’s lowest.” (last item in article) Again, the idea is Americans must send billions now and in perpetuity.

Phil Jones, Nobel winning lead scientist of the UN Climate report and East Anglia, publicly stated in February 2010 there has been no global warming since 1995.

P.S. Lord Monckton says don’t believe reports that nothing is happening in Cancun via his <a href=”http://xmmlbchat.blogspot.com/2010/12/lord-monckton-says-to-ignore-reports.html”>Mexican Missive #3 dated Dec. 9.</a> Our future is all planned out for us by the UN Secretariat to whom we will be subservient. With all the elected representatives we have, none have spoken up to say we will be slaves to the UN over all of our dead bodies. Representative <a href=”http://xmmlbchat.blogspot.com/2010/12/lord-monckton-says-to-ignore-reports.html”>must see the detail</a> that is planned for us (quite apart from ‘climate’). It is imperative that the US be removed from the UN completely. (ed.)

After Court Argument, Seething Frustration on the Left
Townhall
'Sir, do you even remember what my question was?' Prosecution just needs to sit back and let Jussie Smollett continue to bury himself
Twitchy
Latest Poll Numbers Spell Doom for Democrats — and Bust Some Narratives Along the Way
Redstate
Jussie Smollett Gets Destroyed During Cross Examination
PJ Media