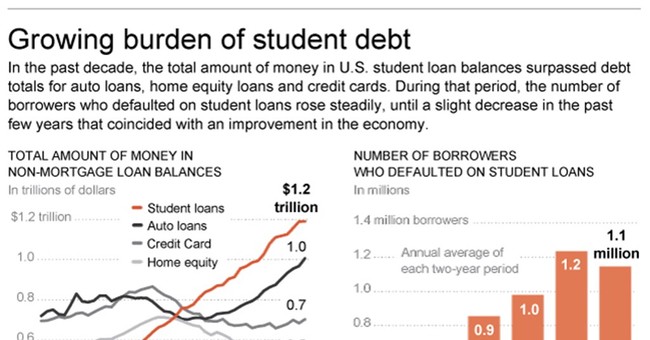 The Republican Party has lost the millennial vote in large part due to one issue: student loan debt, which has chained 44 million Americans to over $1.6 trillion in unpaid college loans. While Republicans missed an opportunity to solve the problem early on, Democrats, particularly of the socialist variety, stepped in with their own, often radical, plans to curb rising student loan debt, which have in part won over a large share of the millennial vote.

Democrats, such as Senators Elizabeth Warren and Bernie Sanders, have proposed cancelling student loan debt, while other progressives have suggested “quantitative easing,” a fancy term that basically means printing more money. Both are irresponsible, and are the type of fixes that the Founders would have decried. Nonetheless, their plans have attracted young voters who want to erase the red in their bank accounts, but it’s not the only reason why nearly 60 percent of millennials—who have surpassed baby boomers as the largest voter age group—are Democrats or lean politically towards them.

Student loan debt affects the life choices of young Americans. Tens of thousands of dollars in debt prevents or delays the average college graduate from getting married and starting a family, which is the institutional bedrock of American society and one of the primary indicators of membership in the Republican Party. Voters who are married, particularly those who also have children, are more likely to vote Republican than unmarried voters. Gallup concluded that “marital status remains one of the most reliable predictors of party identification.”

The Institute for Family Studies found in 2016 that while President Trump won over 56 percent of married voters, he lost 55 percent of unmarried voters, resulting in a 26-point marriage gap that exceeds the 24-point gender gap. Of course, while many aspects of the president’s election were unprecedented, the marriage gap has been a decades-long political phenomenon. Stanley Greenburg, an adviser to Bill Clinton and Al Gore, said that “the marriage gap is one of the most important cleavages in electoral politics,” after George Bush in 2004 won married women by 11 points.

Republicans should be worried that student loan debt has been a roadblock to family formation. A new study revealed that a third of adults between 18 and 34 say they may put off getting married until their student loan debt is paid off. This is a threat to the electoral viability of conservatives. The future of the party depends on it solving the student loan debt crisis to help eliminate one of the primary obstacles to marriage and parenthood. It should support responsible policies that help Americans pay off their student loan debt, which is one of the largest barriers that is preventing them from starting families.

The bipartisan Employer Participation in Repayment Act (S.460)—supported by Senator Mitch McConnell, as well as the entire Republican leadership, and 33 of the most conservative lawmakers in the Senate—would allow employers to contribute tax-free dollars towards paying down their employees’ student loans. They already can contribute—tax-free—up to $5,250 annually for workers who are still students; and this bill would expand the benefit to graduates. In total, the bill would save the federal government and taxpayers over $100 billion within this decade.

This is a free-market solution that does not expand the government’s power. Rather, it allows the private sector to help its employees. At the same time, it removes a serious financial barrier and would make it easier for Americans who graduated with student loan debt to start families. But more support from lawmakers is needed for the bill to reach the president—this is where North Carolina can make the difference.

The bill can make it past the finish line with the help and support from lawmakers in my home state of North Carolina, like Senator Richard Burr and Representatives Greg Murphy, Mark Walker, Patrick McHenry, George Holding, Dan Bishop, among other lawmakers in our state who support helping families but haven’t yet cosponsored the House’s version of the Senate bill, H.R.1043. I hope they join Senator Thom Tillis, who supports the Employer Participation in Repayment Act, in making it easier for people to pay off their student loan debt.

This bill is how the Republican Party can help Americans with student loan debt—and secure future victories.

Katlyn Batts is the Chairwoman of the Wingate University College Republicans and an employee of the Jesse Helms Center.

Psaki Buries Her Knife in Biden’s Back
Townhall
David French SO upset over tweet from The Blaze's Todd Erzen he called to TATTLE ... it did NOT go well
Twitchy
Ye and Candace Owens Sport 'White Lives Matter' T-Shirts, the Left Melts Down
Redstate
The Morning Briefing: Once Glorious California Is Now a Fascist Lunatic Asylum
PJ Media