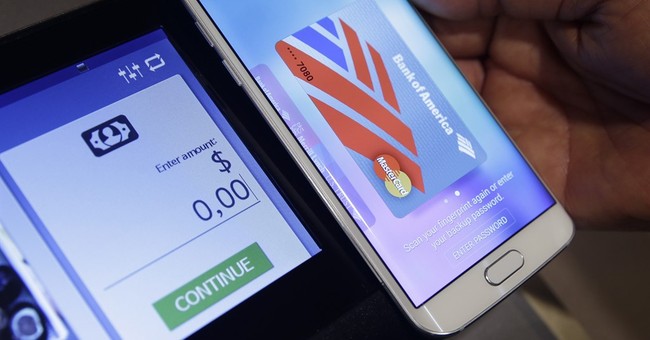 FILE – In this Aug. 6. 2015 file photo, a Samsung employee demonstrates Samsung Pay using a Galaxy S6 Edge Plus in New York. Samsung’s mobile-payment service, Samsung Pay, will expand beyond the U.S. and Korea this year. The Korean company said Friday, Feb. 19, 2016, that it’s coming to China in March, a month after rival Apple Pay. Samsung Pay will hit Australia, Brazil, Singapore, Spain and the U.K. later in the year. (AP Photo/Seth Wenig, File)

The past several years have produced a technological boom in the payments industry. From retail-branded mobile payment apps and blockchain to fingerprint scanning capabilities and everything in-between, there are seemingly endless ways for consumers to pay at the cash register and online. Unfortunately, there are barriers in place that prevent the U.S. payments system from reaching its full potential in terms of both convenience and security for shoppers.

Sadly, the U.S. lags far behind other countries in terms of payments security. In fact, one recent study from Fumiko Hayashi, a Senior Economist at the Federal Reserve Bank of Kansas City, found that the U.S. sees “significantly higher” rates of in-person payment fraud than other countries.

What would cause the U.S. to have such high rates of in-person fraud?

One of the main reasons is that, even though the U.S. has been making the move to chip-enabled EMV cards for years, many payments lack a reliable form of secondary authentication. As Hayashi’s research indicates, “Factors explaining the higher in-person fraud rate include … EMV implementation without a strong verification method, such as PINs.”

Unfortunately, this is due (in large part) to efforts by large payment card networks trying to actively prevent merchants from enabling authentication methods like PIN numbers or biometrics, resulting in fewer choices for consumers when it comes to using the payment methods that work best for them.

As retailers have previously highlighted, card networks exert a great deal of control over industry security standards. One recent paper from the Retail Payments Global Consulting (RPGC) Group revealed that large networks use standard-setting bodies like the Payments Card Industry Security Standards Council (PCI) and EMVCo “as their surrogate as they seek to foster an archaic, card-based environment that is one of the most expensive and fraud-prone in the world.”

Rather than keeping consumers safe, the organizations that set the payments standards (who are board members of EMVCo and PCI) prioritize the interest only of the large card networks like Visa and MasterCard. As a result, all other players in the payments ecosystem – banks, smaller networks, technology companies and retailers –have no choice but to accept these standards as they’re implemented by the large card networks.

And the large card networks use these “security” standards to block out competition from the smaller networks. Hayashi points out in her paper that payments made without PINs must go through large global networks instead of smaller, more cost-effective networks.

Another illustrative example of this is the networks’ upcoming rollout of Secure Remote Commerce (SRC) standards. On the surface, the purpose of SRC standards is to provide customers with a single checkout button when shopping online. However, as RPGC Group points out, SRC is controlled by EMVCo, which means it has the potential to be used as a “competitive pre-emption tool” to keep consumers from choosing the type of payment that’s right for them, and prevent retailers from using the most cost-effective network.

In a world where Apple Pay and the Starbucks App are some of the most popular ways for consumers to check out, it is more important than ever that we empower them to choose how they want to pay; not how big networks want them to.

Standard-setting measures must be open to help the electronic payments system in the U.S. become more competitive. Otherwise, merchants and consumers alike will be left with fewer choices when making and processing payments.

Our payments system, like all of our economy, is at its strongest when it has healthy competition. To reach these goals, everyone needs a seat at the table when standards are set. Unfortunately, the current system is leaving us all vulnerable to more fraud and helping networks dominate at the expense of all the other sectors of payments.

Katlyn Batts is the Chairwoman of the Wingate University College Republicans and an employee of the Jesse Helms Center.

The Coming Green Electricity Nightmare
Townhall
Biden to Coast Guard hero: 'Thanks - now get out'
Twitchy
Doomsday for Democrats in Nevada
Redstate
Biden Washes His Hands of Gas Prices Now That They're Going Back Up
PJ Media