My Weekend with the Gingrich campaign in Iowa

(The tense in this article is outdated. I first posted these Saturday and Sunday on my blog Team Gingrich.)

After I arrived in Iowa yesterday, I went to a game of the AAA affiliate of the Chicago Cubs. Newt threw out the first pitch, which I was not there for, but I did get to meet him and a couple of his staffers, R.C. Hammond and Michael Krull. Newt visited with many of the fans attending, and had numerous requests for pictures and autographs. (Iowa won, and as a special bonus, there were fireworks after the game.) 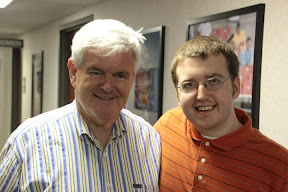 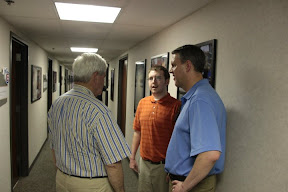 Today, we started out going to the zoo in town for the unveiling of their Australia exhibit. From there, it was onto Lamoni, Iowa, where the Southern Iowa Tea Party put on a townhall event.

Before the event, Newt displayed his fluency in Spanish: 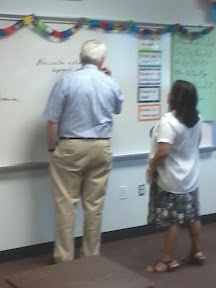 He also chatted with a local staffer from Strong America Now: 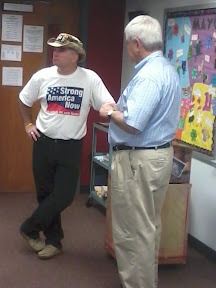 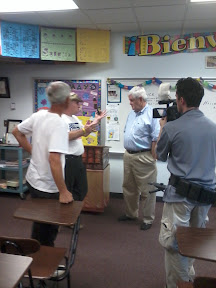 Then it was time for the actual townhall from inside that school: 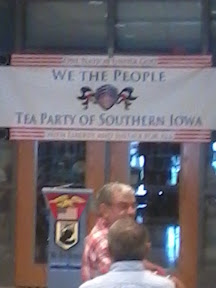 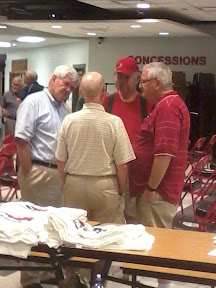 I live-tweeted the speech. Here is my full Twitter feed. I will only post a few here:

@newtgingrich in Iowa: We need both a healthy economy and environment. Oppose using environment to destroy American jobs.

(The wording is clumsy on my part. Newt was speaking of those who talk of the environment but who really just want a bigger government, which leads to the loss of jobs and competitiveness.)

Newt closes by asking audience to not be for him but be with him. Fight will continue even after the election.

That last point is one Newt has made many times; in fact, it’s one of the things that originally drew me to him. He has long talked about there being 513,000 elected officials in America, that the Presidency alone is not enough to bring about the needed change.

And today when he talked about that, he was adamant that his election would just be the start. That in order to get Congress to follow his lead on issues, he would need the American people — in townhalls, by calling and otherwise contacting their Representatives and Senators — to make their voices heard.

He also made the point, as he had in the past, that when he is successful and gets power out of Washington and back to the states — where it belongs — that we make sure our governors and state legislatures stand up for conservative principles. What good is getting the states back in charge if they end up just pursuing the same failed, destructive policies and actions that D.C. has done?

From there, we went to the Pizza Shack, which apparently has been voted the best pizza in Iowa. Their Hampton — their version of The Works or Supreme — was very, very good. 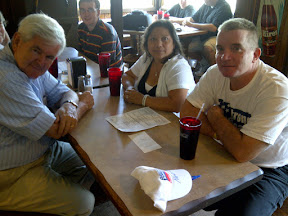 We then drove to Winterset, birthplace of John Wayne. Newt really impressed the people visiting and the ones who run the museum and gift shop with his knowledge of John Wayne movies. You could tell they had heard the usual spiel but nothing like that before. More than one said, “Wow, he’s actually a fan.” Newt was shown the brick out in front of the house that has his and Callista’s name on it since they have donated money for the construction of a new, bigger building in the past.

It has been a great experience. I have helped out on three campaigns in the past — one U.S. House, one U.S. Senate, and one gubernatorial — but nothing compares to this. I hope to make the trip a few more times at least.

On the way to Adel for the Dallas County Fair was the first time I had rode with Newt. (Michael, a terrific video guy, had to leave to go home between John Wayne’s hometown trip and this, so everyone was able to fit in one car.)

Newt made a point of asking me to sit in the back on the driver’s side so that we could talk (he, of course, was in the front passenger seat). Some of the topics were the campaign (of course) as well as the upcoming movie Moneyball, based on a book about the use of metrics in baseball. Newt refers to it quite a bit in his own book The Art of Transformation.

Once at the fair, Newt was greeted by many people even before he got to the bleachers for the dirt track. While he and I sat down, his press secretary, R.C. Hammond, began taking pictures of the track, and unbeknownst to me, this one: 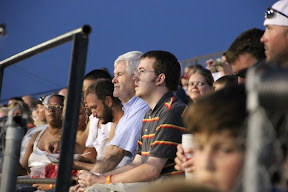 In between requests for pictures and handshakes from those around us, Newt and I talked about the NASCAR track that is about an hour from where I live (and how my hometown made a huge mistake in passing up on it) as well as some political matters. He finally recommended a book I should read — I was shocked it took this long!

We ended up leaving around 10 PM and making the thirty minute drive east back to West Des Moines.

I thank Speaker Gingrich, Michael Krull, and R.C. for allowing me a chance to travel around this weekend.

I will be back in the Hawkeye State in about a month for the State Fair.

Conservative and Miss the Old 'Drudge Report'? Here's Some Awesome News for You
Becca Lower

Ron DeSantis Slams the CDC After Its Latest Flip-Flop
Bonchie