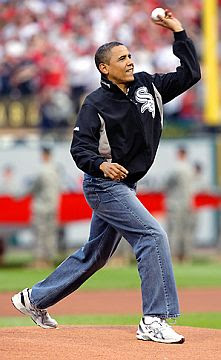 To: Linda Kellen Biegel, a.k.a “Celtic Diva”
Re: Ethics Violation

As you can see from the attached photograph, this federal employee is in clear violation of Sec. 2635.101 of the Standards Of Ethical Conduct For Employees Of The Executive Branch, Subpart A, “General Provisions” – which states:

(8) Employees shall act impartially
and not give preferential treatment to
any private organization or individual.

Millions of people around the world witnessed this federal employee wearing clothing with visible manufacturer’s logos. I call your attention to his Majestic jacket prominently displaying a large Chicago White Sox logo (We can discuss his Asics shoes at a later date). He brandished this logo jacket while acting in his official capacity as President of the United States and official starter of Major League Baseball’s 2009 All Star Game, where he became the fourth U.S. president to ceremoniously throw the first pitch.

Not only was he well aware that there would be extensive national media coverage, the president also knew that international magazine Sports Illustrated was covering the event and Fox was televising it live.

This makes the president’s wearing of White Sox gear while representing the United States the equivalent of a walking billboard, providing benefits to the Chicago White Sox at the expense of all other teams in MLB.

It also raises the question of how this federal employee came into possession of the White Sox jacket. If it was a gift, has he claimed it as such?

How can any reasonable person not believe that won’t translate to some type of benefit for the Obamas in the future? Will the family receive free tickets to White Sox home games? We find this very troubling.

Although you are the official DNC blogger for Alaska, I’m sure you agree with us that the need for good ethics in government rises above mere party partisanship.

Therefore, in the same spirit which you filed an ethics complaint against your state’s governor for wearing a jacket which displayed the logo of a snowmobile manufacturer, we are most interested in learning when you intend to file your complaint with the U.S. Attorney General’s office against this clearly unethical federal employee.

Your attention to this matter is appreciated. Since you are only interested in good and ethical government, we are confident that you will do the right thing. After all, we are sure that you are a person of personal integrity and that you expect that same integrity from all of our elected officials, regardless of political party affiliation.

Yours for ethical government,

Canadian Pastor Dragged Off by SWAT Team Out on Bail Has a Warning for Americans
Townhall
CNN's Adeel Raja tries deleting tweet calling for a 'new Hitler' BUUUT we got it; Updated: Raja's been tweeting about Hitler a long time
Twitchy
Megyn Kelly's 9-Word Beatdown of Maddow's 'Maskless People' Meltdown Is Beautiful
Redstate
UPDATED: Don Lemon Pranked Us All
PJ Media