The Real Trumpkins
With Halloween almost upon us and the truly scary prospect of the election after now seems like a good time to celebrate the tradition of pumpkin carving to welcome trick or treaters. Be Warned, the pumpkins featured here will likely scare off the kids. If I wasn’t familiar with Trump I’d think that one was being attacked by a strange mold. This one actually seems to have better hair than the original but no larger hands. 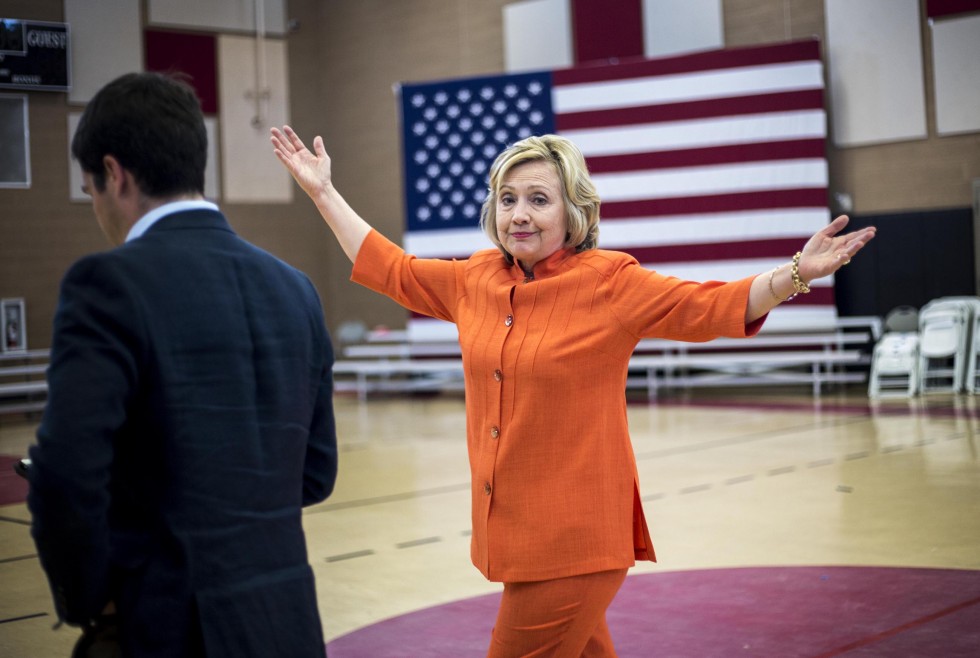 Hillary seems to have gone overboard with the scary pumpkin motif. Well I heard 90% of the candy she gives away goes to the Clinton Foundation. And if you should want to express your feelings about this election there is a pumpkin for you as well.

We All Knew The Left Was Targeting Anyone Who Disagreed About Global Warming
Now there’s proof.

In March, Nate Silver hired Roger Pielke, Jr. to write about climate change for his new website. Pielke basically has made a career of “accepting” climate change but disputing that we can really do anything about it or that it has much of an impact. The new 538 was perhaps the most hyped website to launch in years — and it’s partnership with ESPN gave it the potential to reach a broad new audience. Prior to Pielke writing anything, ClimateProgress published piece reviewing his disputes with climate scientists and the problems with his approach. The piece included numerous quotes from climate scientists: <http://thinkprogress.org/climate/2014/03/19/3415984/nate-silver-science-writer-ignores-data/> http://thinkprogress.org/climate/2014/03/19/3415984/nate-silver-science-writer-ignores-data/

I think it’s fair say that, without Climate Progress, Pielke would still be writing on climate change for 538. He would be providing important cover for climate deniers backed by Silver’s very respected brand. But because of our work, he is not. I don’t think there is another site on the internet having this kind of impact on the climate debate. Thanks for your support of this work. Looking forward to doing even more in the coming months.

According to the DailyCaller , Legum that threatened to sue 538 over  Pielke’s work which jibes well with their stated campaign to get him off 538.

Pielke told The Daily Caller News Foundation claims he threatened to sue his detractors was “a lie.” Reports that Pielke threatened legal action against two climate scientists came from The Huffington Post. Pielke says that’s false. In fact, it was Legum who contacted 538 claiming Pielke had made legal threats against two scientists, according to HuffPo.

Not a particularly pretty picture especially when you consider Pielke’s position was non controversial, namely that larger populations, and larger amounts of wealth were magnifying the damage of natural disasters, not that disasters had become inherently more devastating.

Well I Don’t Know About Common Thieves, They Usually Wind Up Behind Bars.

An eyewitness to the Clinton Foundation’s corrupt dealings in Haiti says virtually nothing has been done to help the victims of the 2010 earthquake in Haiti that claimed an estimated 200,000 lives, and that the Clintons are nothing but common thieves who should be in jail.

Sandy Rios of American Family Radio interviewed former Haitian Senate President Bernard Sansaricq on Thursday, and the enraged Haitian had nothing good to say about the Clintons. He angrily claimed that they brought their “pay to play” politics to Haiti at the expense of the Haitian people.

Sound familiar ? It should and it should be a sad refrain by now. Hillary as Secretary of State, is diverting funds to Clinton Foundation Donors

“Need you to flag when people are friends of WJC,” wrote Caitlin Klevorick, then a senior State Department official who was juggling incoming offers of assistance being funneled to the State Department by the Clinton Foundation. “Most I can probably ID but not all.”

Who are getting wealthy off the contracts and opportunities coming their way. This time it’s a little bit more. The people that are being taken advantage of are earthquake victims. Everything from communications to food production handed over to cronies.

He said he could go on for hours about the Clinton Foundation’s destruction of the rice production in Haiti because they were importing rice from Clinton’s cronies in Arkansas. And rice is something Haiti could really use right now.

The Clintons also awarded the country’s only cell phone company to another crony, Denis O’Brien, using taxpayer dollars. O’Brien has made 265 million dollars, and a substantial portion of that  has gone back to the Clinton Foundation

Just rather sad that the Haitian people first got hit by an earthquake then by the Clintons.

Every government degenerates when trusted to the rulers of the people alone. The people themselves are its only safe depositories.