Obama's Marxism: A Warning for the Democrat Party 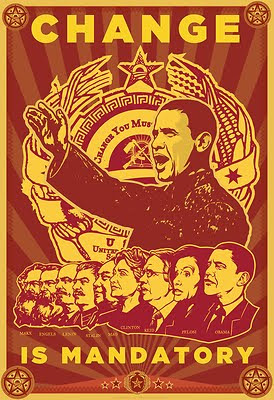 More from Life and Death in Shanghai by Nien Cheng. This from one of her interrogations while in prison during China’s Cultural Revolution.

Cheng, insisting she had acted within the dictates of the Communist Party of China, tells her interrogator: “Chairman Mao talked about the formation of a united front and cooperation with all patriotic Chinese.” (Think: Obama’s promise of uniting America.)

And the struggles never end. For a Marxist hell-bent on having absolute power, there will always be a new major enemy. And something our hapless Democrats don’t seem to get is that once capitalism is abolished, Obama’s list of major enemies won’t be any shorter…and they will probably be on it.

As I read Cheng’s book and as I watch as ranking Democrats, and former president Clinton himself, tell their peers to forego their political careers and vote for a health care bill their constituents overwhelmingly reject, I can’t help but wonder who these Democrats are really afraid of.  And this leads me to make the following assertions/predictions about Obama and his relentless pursuit to create a Marxist America:

Destroying capitalism and thereby bringing America to its knees has long been the gold ring for which Marxists have reached throughout history. And no one has ever been as close to accomplishing that goal than Obama. Whether he is the newest architect of the latest attempt to destroy America or just a Marxist prince reaping the benefits of his Progressive predecessors matters little. If successful, Obama will go down in history as the man who toppled the last bastion of freedom in the world-the United States.

Obama knows this. It is what drives him.

With that in mind, know that everyone is expendable in Obama’s world. Don’t look for him to care as he betrays his voting base and the ranking Democrats who put him into power. Consider them the lesser enemies he united and used to get him to the White House. Look for them to be the major enemies as he strips his voting base of their jobs and their rights, and picks off any suspected opposition from within his own party.

There will be no emotion displayed by this man who is determined to be the One who ushers Marxism into America. There are will be no allegiances and no loyalties. There will only be lock-step obedience to an ideology of oppression and unchecked power.

As unemployment soars, as health care declines, and as this country is laid to waste by it’s external enemies, Obama will remain detached and cold. As our economy is intentionally sabotaged for the purpose of forcing dependence upon the government, any attempt to appeal to his conscience will be futile.

It is not for America, but for absolute power over her, that he toils.

And if, and when, those in his party come to their senses and try to rectify the disaster created by the despot they protected, jockeyed, and lied for it might be too little too late. His allies will be cast aside. Hand-picked confidants and czars will be fired or left to defend themselves against the outcry of the nation’s people. There will be no defense of them from Obama. They will be left entirely on their own. Again, they, who were, in truth, always one of the lesser enemies, will become the new major enemy as Obama clears the path before him. History has proven time and again that Marxist dictators share power with no one.

Marx’s desperate and flawed ideology was borne out of a life lived under an oppressive czarist regime. Unfortunately, his followers, past and present, view anything other than Marxism as oppressive enslavement of the working class (hence the Marxist’s use of unions). In their all-out effort to force Marxism/communism (in all its evolving forms) on a nation they have to first create financial and social chaos. Once this is accomplished, they (for a brief period) play the part of the benefactor and proceed to “help” the people while actually leading them into enslavement by their own government.

Marxism can be forced (veiled, of course) upon a people only when the oppressive conditions Marx lived in are recreated. These are calculated moves Obama is making. That said, Obama does not feel any empathy where American suffering is concerned. Humanity is as foreign to Obama as it was to his predecessors. Americans aren’t people, they are a means to an end. We, the American people, are Obama’s major enemy who must be overcome.