Obama Throws America and Her Troops Under an Afghan Bus

[Or, A Navy Wife Tears Hair Out]

This is unconscionable. Our troops have lost hope because we have a stark raving mad, narcissistic fascist for a president. (Did I leave anything out?)

It is gut-wrenching to see our soldiers demoralized like this. And, trust me, it is maddeningly infuriating to be married to an active duty military member whose commander in chief is not only frighteningly incompetent, but sadistically and pathologically dangerous as well. This man has no love for this country. He feels no duty toward our troops.

Obama is intentionally and methodically making our troops vulnerable to the enemy.

Obama is intentionally and methodically destroying our economy.

Obama is intentionally and methodically killing what’s left of the American work ethic.

Obama is intentionally and methodically creating a racially divisive America.

Obama is intentionally and methodically taking away the liberty of Americans.

Obama is intentionally and methodically destroying this great country.

And he still sleeps like a (spoiled) baby at night.

Make no mistake, it is a non-issue to Obama that the American people do not support his version of Commie-Fascism and his blatant disregard for the military. Obama does not care about poll numbers. Like Mussolini, he knows you don’t need popular opinion to pull off a bloodless revolution, just enough gullible accomplices to get the ball rolling. Oh, and some fascist thugs who are willing to intimidate and beat people up…to get the ball rolling.

So, while our troops lose heart because they have been abandoned by their commander in chief; while they serve and suffer under a president who is turning out to be a bigger enemy than Al Qaeda, Obama further destroys America from within with his vapid rhetoric, his clandestine congress, and his manipulative benevolence toward the Hand Out Crowd who line up for his “free” money (aka, My Money).

This is not what our service men signed up for.

This once great nation, America, the land of freedom and endless possibility, that is what our men in uniform volunteered to defend. It would be disheartening, indeed, to be this man… 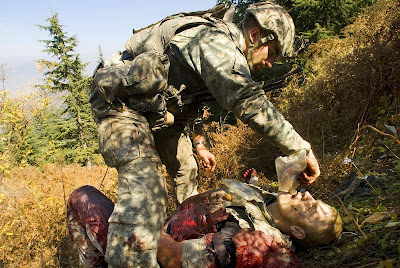 …and realize that your own commander in chief was tearing down the very things you’ve sacrificed to defend.