Obama Pimping Himself For a SAG Card 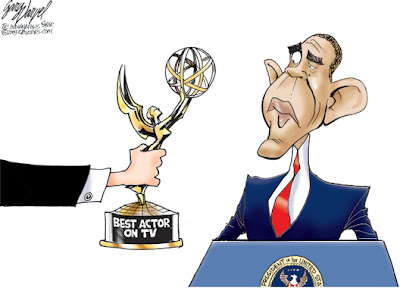 We are way past asking this guy to act presidential.

Wannabe starlets in Hollywood don’t schmooze the camera as much as this guy. How many times was he on TV last week? Five…hundred? I lost count. The question begs: While he’s pimping for a SAG card, whose running the country?

But I have to give credit where credit is due. While he is an abysmal failure at being president, he does have some mad acting skills.

When asked by George Stephanopoulos whether he was going to cut funding to ACORN, he had this reply:

“You know, it’s–frankly, it’s not really something I’ve followed closely. I didn’t even know that ACORN was getting, uh, uh, a whole lot of federal money.”

See? Mad skills… or he’s a sociopathic liar dissing his ACORN cronies. My money’s on both.

CNN Forced to Fact Check Joe Biden's CNN Town Hall
Townhall
If you thought Jen Psaki was pissed with Peter Doocy before, just wait'll you watch him use Joe Biden's border remarks to twist her into a pretzel [video]
Twitchy
Rich Lowry: Trump Won't Walk Away With GOP Nomination in 2024
Redstate
BREAKING: Alec Baldwin's Gun Loaded with One Live Round in Place of a Blank
PJ Media