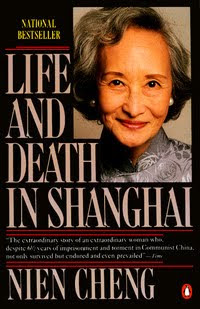 If Joe Wilson were to apologize on the House floor, which he says he won’t do, it would set the dangerous precedent that anyone who dissents from the Party Line will be forced to give a self-incrimination speech. I know, it sounds paranoid, but have you seen the Democrats lately? Trust me, this is definitely the road they’d love to go down.

In her book, Life and Death in Shanghai, Nien Cheng, a former Shell Oil executive in Mao’s Communist China, tells just how these things work. The similarities between the Cultural Revolution in 1960’s China and the Liberal agenda that is playing out in this country today are breathtaking…in the most disturbing way.

At the risk of sounding like a book review, this book should be required reading for anyone who wants to truly understand the mental game of the Left.