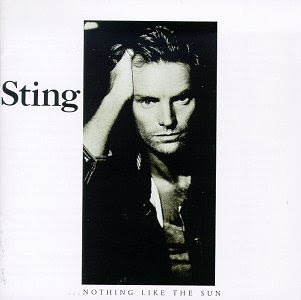 “If we seek solace in the prisons of the distant past
Security in human systems we’re told will always always last
Emotions are the sail and blind faith is the mast
Without a breath of real freedom we’re getting nowhere fast
…History will teach us nothing.”

These words were written by Sting for his 1987 album Nothing Like the Sun. The impetus behind this album came from his participation in the Conspiracy of Hope Tour for Amnesty International. Now, I am not normally an ardent fan of entertainers who morph into the Mercy Police. You know, those stars who love the environment almost as much as they hate American capitalism; the ones who fly private jets to impoverished nations for photo ops with sickly children and then get whisked away to their 5-star hotel. Yea, those guys.

But I didn’t know about all the duplicity when I first heard this album. What I did know was that Sting had toured Latin America and saw, first-hand, how despots ravage the soul of a nation. In the song, “They Dance Alone”, from the same album, he singles out the mourning ritual of women who have lost their husbands and sons by the hands Chilean dictator August Pinochet. The whole album is worth a long listen.

I nearly played the grooves out of this album in my college days. My world view at the time was a veritable soup-salad, but one of the themes of this album affected me deeply and served to drive my passions to this day: History will teach us nothing.

The clarion call from the true Conservative Right is one of stern warning to this nation to pay attention to the lessons of history. Obama’s agenda is unlike Mussolini’s, Stalin’s, or Pinochet’s only in that it hasn’t come into full bloom yet. Will an Obama regime be like that of dictators of the past who tortured their own people for dissenting? Hard to say. If he gets two terms, it’s less hard to say. I’d like to think it wouldn’t happen in this country (provided a few good red necks manage to stash away several guns and a Bible or two), but did we ever think we’d get to the point where we would question when life begins…or to the point when we wouldn’t question a government take over of private businesses?

Allow a little history lesson from the very distant past.

Disclaimer for the spiritually challenged: If the tenants of the Christian faith cause you to suffer from uncontrolable bouts of Turett’s, you might as well stop reading from this point on. What I offer here is not a load of hyper-spiritual, get on your knees and repent (though we should…we definitely should) exhortations ; what I offer you is a history lesson-one that this nation would do well to learn.

“Your own evil will discipline you;
your own apostasies
will reprimand you.
Think it over and see how evil
and bitter it is
for you to abandon the Lord your God
and to have no fear of me.” Jeremiah 2:19

“When you speak all these things to them,
they will not listen to you. When you call to them,
they will not answer you. You must therefore
declare to them: This is the nation that would not
listen to the voice of the Lord their God and would
not accept discipline. Truth has perished-it has
disappeared from their mouths.” God to Jeremiah 7:27-28

“Therefor listen, you nations
and you witnesses,
learn what the charge is against them.
Listen earth!
I am about to bring disaster
on these people, the fruit of
their own plotting, for they have paid
no attention to My Word.
They have rejected My law.” Jeremiah 6:18-19

These were just some of the warnings God told Jeremiah to give to the people of Israel. God’s bottom line: Reject Me and you are toast.

Suffice it to say, despite God’s repeated grace and mercy towards them, Israel rarely listened.

Now, I’m not learned when it comes to prophesies, so I don’t go there, but anyone willing to learn can look back and see that there is one constant in the cycle of history: Nations who have abandoned God don’t do so hot.

Ancient Israel willingly caved to the whims of worthless godless kings and the false religions of surrounding nations. Sound familiar? Mind you, these were God’s chosen people. They knew better. They had been warned. Chosen people or not, our nation’s founding had a definite Christian twist to it. And let’s be honest, the nation’s broken moral compass not withstanding, just like Israel, we do know better than to do the things we are doing. (A certain video of an agency our president used to work for comes to mind.) Ignorance won’t be an acceptable defense come Judgment Day. Just sayin’. (Yes, I said Judgment Day.)

The “catalog of crimes” Israel perpetrated against God and the discipline God meted out on them serves to show us that we are utter fools if we expect a different outcome for the very same offenses.

But since, historically, history has taught us nothing, I guess we are fools. (For further exhortations on this, see my posts on Public Education in America.)

What I mention here are not the ‘human’ systems Sting laments in the opening verse of his song. The human systems are the very ones that breed clowns like Pinochet and Obama. What I am referring to is the system of the One who is the ultimate creator and judge of all the world. Sorry if this offends-I don’t make the rules.

These days my world view is in tact and it is Biblical. (Though, marvelously flawed vessel that I am, one would be justified in questioning this on many and varied occasions.) And while I don’t share Sting’s religious or ideological preferences, his words still ring true. History will teach us nothing, especially if we continually refuse to learn.

In the Final Stretch for Virginia, Youngkin and McAuliffe Are Tied
Joe Cunningham