Obama: Let the Children Come To Me 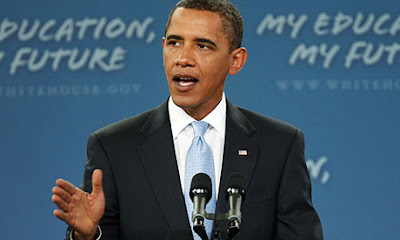 While the temptation to run Obama’s speech to America’s school children through the satirical shredder is strong, I’m going to avoid it on the grounds that much of what he said was, indeed, true and inspirational.

Kids do need to realize that they are responsible for their education, and that they must work hard and persevere in order to make it in this world. All of our kids having something to offer. And, yes, the paths these kids choose will affect this country.

So what’s my beef? Well, for starters, it came from Obama, which automatically makes it suspect. A wannabe communist using conservative language can only mean one thing: He’s trying to pull a fast one.

You know, the Chinese government, during the Cultural Revolution, “inspired” the Chinese school children to work hard in their studies, but at the end of their school careers the government assigned them their jobs. So while Obama waxes eloquent to these students about them becoming doctors, writers, or innovators, he’s leaving out some very important stipulations. First, in Obama’s world, a doctor won’t be able to choose his specialty, let alone treat patients unless the government signs off on it. And, second, In Obama’s world, the only writing that will be allowed will be that which meets the approval of his publishing czar. (I know, he doesn’t have one, but give it time. My money is on Ariana Huffington.) Lastly, in the world Obama wants to create, there won’t be any new iPhones because there won’t be any large, evil corporations to produce them.

What Obama really mans when he says,

“And this isn’t just important for your own life and your own future. What you make of your education will decide nothing less than the future of this country. What you’re learning in school today will determine whether we as a nation can meet our greatest challenges in the future.”

“Our educational policy must enable everyone who receives an education to develop morally, intellectually and physically and become a worker with both socialist consciousness and culture.” Mao Tse-tung

Another problem with Obama’s speech is that he really doesn’t believe anything he said. Kids shouldn’t spend all day in front of the TV? Who is he kidding? What better way to further the leftist Democrat agenda than to have an entire generation rendered unproductive and in need of social assistance because they won’t scrape their cans away from Comedy Central and its spot-on political analysis? Besides, if kids gave up their TV habit, they’d miss their president on Saturday Night Live. I’m telling you, he’s being very disingenuous here.

And finally, I find it rather irritating that Obama gets the green light to grace America’s school children with a nationalized address, but when G. W. Bush (then Vice-President) did it in 1991, congressional committees to investigate him spring up like paternity suits at a Kennedy family reunion. Wasn’t it Sen. Gephardt (D-MO) who said, in reference to Bush’s address:

“The Department of Education should not be producing paid political advertising for the president, it should be helping us to produce smarter students.”

By the Democratic Party’s design, America’s school children are not being taught the truth about the history of this country and the rest of the world. Because of this, they are completely incapable of recognizing a socialist in capitalist clothing when they see one. This is too bad; Obama’s speech would have made for one hell of a teachable moment.

A Group Of Parents Sent Their Kids' Face Masks to A Lab for Analysis. Here's What They Found
Townhall
Patriarchal, sexist Victoria's Secret replacing the Angels with soccer star Megan Rapinoe and the rest of the 'VS Collective'
Twitchy
Joe Manchin Phone Call Leaks and It Has Massive Implications
Redstate
Texans Are Getting Blackout Warnings in June. Why?
PJ Media