Michael Moore: Tanking the Film Industry One Capitalist At a Time 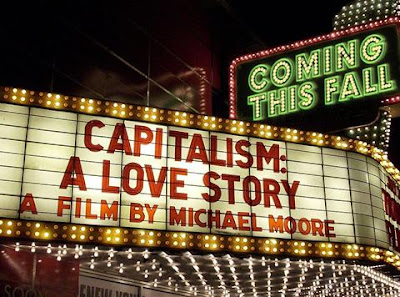 Using the liberal template of “Now that I have made my millions, I will decry the evils of capitalism and work tirelessly to deny others the opportunity to become as filthy rich as me”, Michael Moore has fashioned a new cinematic masterpiece entitled Capitalism: A Love Story. This has YouTube’s Award For Best Video By An Amateur written all over it.

So Moore hates capitalism. That’s rich. No, scratch that, he’s rich. And he got that way because of…wait for it…capitalism. The moral of his socialist propaganda flick is “Capitalism is an evil, and you cannot regulate evil. You have to eliminate it and replace it with something that is good for all people and that something is democracy.” Not sure how lumpy plans to eliminate capitalism, but if he’s tracking like I think he is, revolution is the only way.

The most laughable part of all this is that Moore thinks he’s achieved Most Favored Radical status with the Democratic Party by making these little flicks. Little does he know he’s at the back of a line that is long and felonious.

I’d like to make a very important point here. Capitalism isn’t the problem in this country. The problem is greed. And, no, they aren’t one in the same. How the likes of Moore, Obama, Pelosi, Guitner, Reid, Frank, and the scads of Hollywood elitists, who live very extravegant lives, have the kahonas to vilify an ideology that clearly made them millions is beyond me. These very same people demand that the average American live with less while they accumulate more. How czarist. How communist. How unAmerican. I’ll say it again, greed is the problem in this country. And the greed lives and breathes most virulently among those who want to destroy capitalism and thus keep the rest of America from obtaining what the anti-capitalists so lavishly enjoy.

It’s important to understand that when Moore speaks of democracy, he means a Maoist democracy. But Moore, being the idiot that he is, doesn’t know what he means. I’d like to throw the lubber a bone and say he’s just ignorant, but I don’t believe he is…completely. Moore, for whatever reason, is an anti-American socialist who hates this capitalist country all the way to the bank. I’m pretty sure he knows that it is capitalism, and the freedoms that go along with it, that allowed him to make his anti-Bush movies free from the fear of becoming somebody’s special fat chick in prison. (Is there no justice?)

If Moore’s buddies in Hollywood have any smarts at all, they’ll shut this guy up, and quick. The end of capitalism would spell the end of the film industry as it exists today. Gone would be days of flying away, spur of the moment, in one’s private jet for some “down time” between films. Other than the carpet color, the days of lavish award ceremonies would be no more. Large Hollywood Hills homes? Nada. Accolades and praise? Think again. The individual is never to be praised above the state as a whole in Moore’s communist Utopia, a little fact of which he is obviously ignorant. Kind of puts a damper on that whole Oscar thing.

This reminds me of a period in Chinese history called the Cultural Revolution. I entertained, for the briefest moment, that Moore might feel a bit nostalgic for this era in Chinese history, but then I realized he probably couldn’t find China on a map. But I digress. During the Cultural Revolution, nifty little campaigns like the Thought Reform Movement and the Anti-Rightist Campaign were enacted by Mao Tse-tung’s regime. Each campaign stripped away more freedoms by manipulating, castigating, and incarcerating citizens who didn’t grab ankle for the Party line. The film industry, wasn’t immune. Actors and actresses became mere tools in Mao’s propaganda machine.

And while it seems, given the current climate in Hollywood, that there would be little, if any, resistance to being the official mouthpiece of a communist government (aren’t they already doing that?), we were made to be a free people. I’d bet Michelle Obama’s clothing allowance that the Hollywood leftists would be the first to try to exercise their outlawed First Amendment rights once they climbed out of the rabbit hole and realized that any attempt to keep their way of life would make them anethema to the very government they helped into power.

I know, I know, I sound like a paranoid extremist…but only to someone who knows nothing of Marx, Lenin, Stalin, Mao, Castro, or Chavez, to name a few.

Here’s a little glimpse of the Chinese cinema under Mao Tse-tung. (By the way, things in China haven’t changed much.)

“Conceived as an effective propaganda weapon of class struggle, socialist cinema was devoted to serving workers, peasants, and soldiers, who were to emulate Communist heroes and martyrs on screen.”

“Public space and collective spirit replaced private and personal matters, and all characters were fashioned into certain “types” (e.g., heroes and villains) so as to stage clear-cut ideological struggles mandated by socialist realism. However, considerations of “revolutionary romanticism” always superceded those of realism (socialist or otherwise), because the “real” or historical “truth” was something the Chinese Communist Part leadership defined from its Utopian perspective.”

“During the socialist period, politics reigned supreme over art, and party ideology penetrated everyday life. The planned economy eliminated all market functions. A single state corporation and its provincial branches distributed all films approved by the Film Bureau, theaters showed films as allocated to them, the audience had little effects on production policy, and studios no longer developed distinctive styles or competitive edges. In short, box-office revenues were rarely of concern to artists, cadres, and workers, all of them salaried state employees.”

Let me see if I got this straight; in a communist country, style and competition in the film industry go out the door as the government message takes over. Basically, the government controls what can and cannot be seen and how it will be presented. And on the subject of control, it looks as though the government also dictates how much the actors make. So, Tom Cruise would pull in as much as the local park ranger. Works for me, but it kind of sounds like Obama and his treatment of corporate CEO’s…but I’m probably just reaching.

And here’s a little bit of trivia for you. Mao’s wife, Jiang Qing, was an angry former actress who was put in charge of all the arts in China. Out of jealousy she had the actresses who had gotten better parts than her in the past put into labor camps. 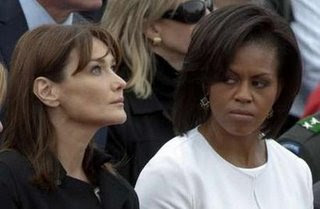 But I don’t mean to insinuate anything…

Moving on from Moore’s Utopian dream, let’s look at the film industry in evil, capitalist America. First off, one can’t help but notice that there are no limits to what can be made and peddled to the masses…that is, as long as the film meets industry requirements of one homosexual, a minimum of 48 f-bombs, three references to the stupidity of Christians, and at least six scenes of premarital sex. But other than those stipulations, it’s pretty much anything goes. Oh, and in an evil capitalist country the actors often earn more than government officials, own private jets, and have lots of awards ceremonies where they go to hear how wonderful they are. Just try that in a communist country.

But Michael Moore knows full well all the perks of capitalism. Just look at him; you don’t become that size through rationing. That alone should cause him to be thankful that he lives in a country where even complete morons like himself are able to make a few million bucks.