How to Spot a Terrorist Threat: A Liberal Primer 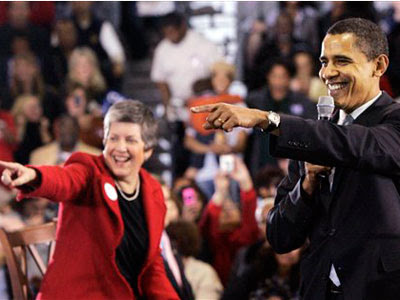 Napolitano and Obama demonstrating how to turn your neighbor in to Homeland Security. “We believe in total anonymity. Just point to your pro-life neighbor or the retired veteran in the grocery store and we’ll take care of the rest.”

For anyone who might be a little fuzzy on Janet Napolitano’s inter-office memo about the dangers of living next door to a military veteran, a pro-lifer, or anyone who actually views the Constitution as something more than a waste of a perfectly good tree, I offer these snippets from the book, A Liberal’s Guide To Terrorism: Can You Spot a True Threat To America?

#1 Any former member of the military who has served this country and kept Americans safe from harm, foreign and domestic: Threat

Homeland Security Action Plan: Full body cavity search of any veteran (real or imagined) before boarding an airplane. Monitor all VA loans to be sure they aren’t living too large. Limit veteran to one bag of fertilizer per year. Make them pay for their own medical care. Wire tap all American Legion and USO facilities. Direct Hollywood to make more movies depicting war vets as misguided losers who hate America (Contact Sean Penn). President Obama to make frequent visits around the world repenting of the existence of an American Military.

#2 People from other countries who have flown airplanes into the buildings of major American cities and killing thousands: Not a Threat

These people are our friends; besides, we deserved it. They will be allowed, turbans and all, to board any aircraft free from the fear of being unfairly profiled or cavity searched. Approximately $20 million in stimulus money allotted to resume flight classes in Norman, Oklahoma starting in 2010. $5 million in stimulus money for iPods, prayer rugs, and weekend passes for detainees in Guantanamo Bay. President Obama to make frequent visits to said countries for the purpose of repenting the existence of an infidel America.

#3 People from our own country who have bombed government buildings and called themselves “The Weatherman”: Not a Threat

Dissent is patriotic for socialist sympathizers. President Obama to make frequent visits to said person’s home and deny the existence of a friendship.

#4 People who fight for the rights of unborn human beings. Threat

#5 People who legislate and/or perform the wholesale slaughter of millions of unborn humans: Not a Threat

#6 People who claim the right to bear arms: Threat

Homeland Security Action Plan: Ban gun ownership. This to include: semi-automatics, hand guns, shot guns, paintball guns, air soft guns, water guns, glue guns, and those highly dangerous guns for children with the bright orange plug on the end of the barrel. Tax Ted Nugent out of the country. Report all cars brandishing an NRA bumper sticker to the Homeland Security hot line. President Obama to make frequent trips to Mexico to blame America for the violence in Mexico, and, of course, repent of America’s very existence.

#7 People who refer to our government as “The Collective” and call one another “Comrade”: Not a Threat

It’s high time the proper verbiage was used around this country.