Wanted to pass along this obituary from RightMichigan.com  just in case no one was paying attention. Sorry to be the bearer of bad news folks, she was a fine Gal. 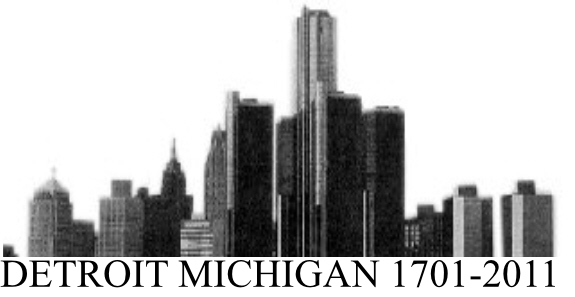 Detroit, Michigan, The “motor city”,  jewel of the mid-west, manufacturing magnet, and dominator of automotive excellence for multiple decades passed of cancer during the night. She was 310 years old.

Born in 1701 as a fur trading post, Detroit’s history had been vibrant and always interesting.  In the Mid 1700s, Detroit’s affair with the British might have been long term but for General Washington bringing her back home in 1796.  In 1805, she became scarred horribly by a fire, yet still had the tenacity to flourish, and the allure to bring more settlers and become incorporated as a city in 1815.

As Michigan adopted its first constitution in 1835, Detroit was honored with the designation as the capitol. A couple of years later, the state was admitted to the union. In 1847, Detroit lost her capitol seat to her daughter Lansing, but remained and served with honor against aggressions emanating from the Brits in Windsor.

In the late 1800’s through the early 1900’s Detroit was called the Paris of the West for its beautiful flowing architecture and mansion design. Among notables in and around that era it hosted the Edisons, Fords, Durants, et al.  All of whom adding to the vibrancy of the already most exciting city east of New York.  The industrial age would have been nothing but for Detroit and its inhabitants, and a time where innovation and wealth creation anchored both this country’s superiority in the world, and its place in history as the motor of Democracy.

Detroit’s contribution during wartime was irreplaceable.  Her ability to provide our soldiers with the greatest technology of the day and machines to destroy our enemies second to none.  The ability to provide defense support declared to the world, there is none stronger than the US of A.  Peace through strength on our shores was guaranteed for decades.

In the 1960s, Detroit contracted a Great Society Disease, (GSD) leading to continued graft, corruption, and a deterioration which it has not been able to shake. With each new leader, a new type of parasite invaded the city. The past forty years of Detroit’s life have been dealing with the cancer that metastasized along with the failing systems, which one by one revealed how sick our old girl was.

Sadly, her rotting carcass is still occupied by the parasites which have finished her off and her disease has now spread nationwide.

Detroit  was preceded in death by her sisters Flint, and Benton Harbor. She leaves behind cousins Toledo, and Daughter Lansing, and hundreds of other children and siblings throughout Michigan.

There will be only mock services held.

Bill Maher Notices Something Odd About These Transgender Kids
Townhall
Guy Benson compares MSNBC, CNN graphics on Ga. early voting to what they were pushing last year
Twitchy
Durham Drops Another Bombshell, Reveals FBI Lied About Hillary Clinton-Supplied Disinformation
Redstate
The ‘Mary Poppins of Disinformation’ Inadvertently Spills the Truth About What the Board Was Going to Do
PJ Media