To my Tea Partying friends. If ever there was a time to break out the thinking cap, it is now.

Obviously we want limited government, we want the restoration of power to the people and not politicians. We are concerned that Washington is not listening to us, and that government has grown too large and cumbersome. There is no doubt where most of us stand… and why.

One of the toughest things we have had to do was come together on an understanding that in most cases, a third party is NOT the answer to the problems we face. Our best bet on short notice has been the re-invigorating of constitutional ideals through a new level of involvement with the existing political parties. Outside of that infrastructure all bets are off .. at this time. It ain’t perfect, but its a reality.

The GOP has been the recipient of fresh conservative activist blood, and while producing some of the old, has still inspired a much refreshed pool necessary to even think about reshaping the nation. While working within the framework, it is critical to accept some of the perceived losses in order to accept the wins that may well be in the making.. but years down the road. If you cannot play by the rules it is hard to play at all.

Sadly, there are those who take their marbles and run to another game when their efforts produce a decidedly unfavorable outcome. They are not interested in advancement of conservative ideals in any moderate to small way, but carry on in an all or nothing paradigm.

Perfection sought where none can exist.

Thus we have Glenn Wilson, and independent candidate who is interestingly similar in what he represents to the Republican, Dan Benishek. It is not only that Glenn exists as a candidate, but he has as a supporter, a former Republican primary contender, Linda Goldthorpe in a functionally supportive role.

Linda would have had the FULL support of the Republican party if she had won the August primary. Perhaps continued involvement with the current Republican nominee’s campaign might well have found her in a position where her scholarly talents would have assisted the regrowth of the party. Perhaps even to a place where she could feel more comfortable with policy and action from those who are parts of it. Yet, when it mattered, she bailed.

And part of her electoral entourage comprised of mostly Libertarians who have an unreasonable distrust in the ability of the Republican party to re-brand itself, EVEN WITH the tea party efforts have given Wilson that 7 percent base on which the independent candidate feels is an appropriate launch point for a campaign to nowhere. Those newly energized ‘conservative’ independents that just don’t like the two party system will do what they can to make it SEEM like this is the year for their big break. With a myopic idealism that forgets that 30% that will NEVER vote outside the Republican or Democrat party from either side. (yes.. 60% total)

And The Democrats have just figured out what to do about it. They have found the best thing for those supporting Gary McDowell’s campaign to do, is keep Team Wilson’s dream alive!

And how to do that? ..Make him feel important, and advertise FOR HIM.

Obviously, the Michigan Democrats could not espouse all the good ideas that Benishek and Wilson share as worthy of ‘praise,’ yet they can work the 58% that is likely to vote Conservative in a way that makes sure the conservative voters are confused who might be their best friend. And while many of the Tea Party supporters have accepted Dan Benishek as their best hope within the 1st Congressional district, a reminder that Glenn Wilson is all about those ‘crazy Tea Party ideals’ is sure to confuse some who do not understand their votes for Wilson come at a cost.

So in the images below, we now see the first efforts of the Democrats to ‘label’ Glenn Wilson as a TEA PARTIER (click on them to enlarge) 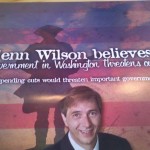 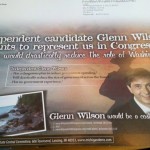 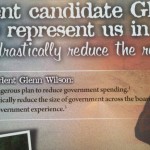 This also explains the ‘25% Wilson polling’ that the Democrat internal polling had produced. Its a trick. The campaign manager up until October 1, Rich Carlson, even QUIT the Wilson campaign because he recognized there was no hope for the Wilson campaign EXCEPT as the spoiler. Its a lie. Its what they do best.

Carlson saw this coming. The use of a marginal candidate to erase what should be an 8-10 point lead in an environment ready for a proper correction. Why would the Democrats want anything different? This is ‘patriotic GOLD’ for them and their socialist puppet McDowell. Appeal to those Tea Party instincts with imagery that would swell the hearts of some to a defense of Wilson, while at the same time leaving the logical candidate Benishek just a few votes shy of reclaiming a long time Democrat held seat. All the while team Wilson polishing their prized 12 point trophy.

Rich Carlson did the right thing. He is no fool.

But the Michigan leftist Democrats, projecting their own failure to logically consider outcomes think we have enough on our side to make up for it.

The Christian Church Is Forgetting Who It Is

The Coma Before the Storm
Townhall
'Because I didn't say anything': President Biden explains to the press why they couldn't hear him answer
Twitchy
The Biden European Chaos Continues: Biden's Brain Breaks in the Middle of Press Conference
Redstate
BREAKING: The Babylon Bee Scores a Major Victory Over The New York Times
PJ Media