Fake is one thing, but possible criminal fraud is another thing entirely.

One of the five candidates for the Michigan Secretary of State positions has announced today that she has discovered one of the fake tea candidates did not even know he was on the ballot.

In a late afternoon press release, Ruth Johnson, a clerk for Oakland county discusses an issue with a candidate’s filing for a county seat election:

“We have a candidate filing with signatures we suspect are forged and an out-of-state high school teacher who says he never filed to run for office and has no idea what this is even about.”

Apparently, on July 23, 2010 a man calling himself Aaron William Tyler filed signed paperwork to run on the November ballot as a “Tea Party” candidate for the Oakland County Board of Commissioners, District 2 seat. The candidate also filed paperwork to form a campaign committee, Citizens for Aaron Tyler. He listed a Springfield Township address and gave his birth date as Feb. 26, 1983. 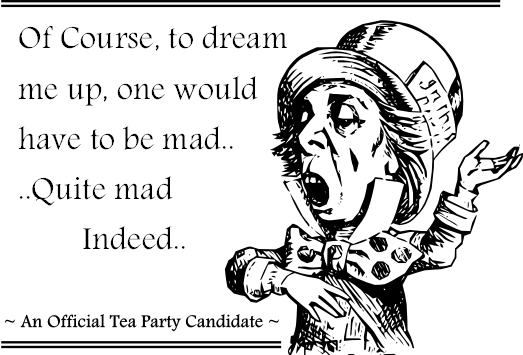 However, when Johnson’s office notified Aaron Tyler, now living out-of-state, that he had a $30 late fee for failing to file proper paperwork for his committee, he told Johnson’s Director of Elections, Joe Rozell, that he had no idea what they were talking about and that he had never filed paperwork to run for office. Tyler’s signature on the apparently falsified candidate filing, which had been notarized, does not match his signature on file in the State’s Qualified Voter File.

At a press conference Friday, Johnson read a letter she received today from Aaron Tyler. His signature on today’s letter did match Tyler’s signature in the state’s Qualified Voter File:

“This letter is in regards to the elections filing with the Oakland County Clerk’s office. I was shown a document that states my intention of being placed on the ballot for this fall. I have been in Phoenix, Arizona since July 27, 2010 for a new job. I did not sign this piece of paper. I have been receiving calls in regards to various aspects of this election process and have been confused as to why I was getting those. I figured it must have been some sort of mistake. I finally took the initiative to call the Clerk’s office to investigate and they have helped explain the situation to me. I have no intentions of running for elected office. I believe a fraud was committed.” – Aaron Tyler, Aug. 20, 2010

“Here we have evidence that their concerns may be well-founded. We must ensure integrity in our elections. This is a group that is trying to deceive voters and now it appears that they may have committed election fraud. Our state needs an Elections Crimes Unit to investigate allegations like this.”

Yeah him..  The guy we busted a couple of weeks ago.

Johnson has called for election officials across the state to examine all candidate filings by “fake” Tea Party candidates, especially any and all candidate affidavits notarized by the same individual who notarized the Tyler paperwork. However, Because Bauer is Notarized in her county, it would be unlikely his name appears anywhere else.

Johnson also said the documents have been turned over to the Oakland County Prosecutor’s Office and she will hand-deliver the documents to the Michigan Attorney General’s Office for investigation On Monday. Johnson said she will also be testifying about the alleged fraud before the state Board of Canvassers Monday on Monday.

Another Secretary Of State Candidate, and sitting Calhoun County Clerk Anne Norlander weighed in briefly on this breaking news:

“As a matter of proper procedure, we examine all candidate filings for accuracy, including signature verification. ~  Anne Norlander, Calhoun County Clerk and Register of Deeds”

A previous post documented the handling of this issue by the MI GOP with their protest and challenge of the legitimacy of the Democrat sponsored “tea party.”

More as we get it.