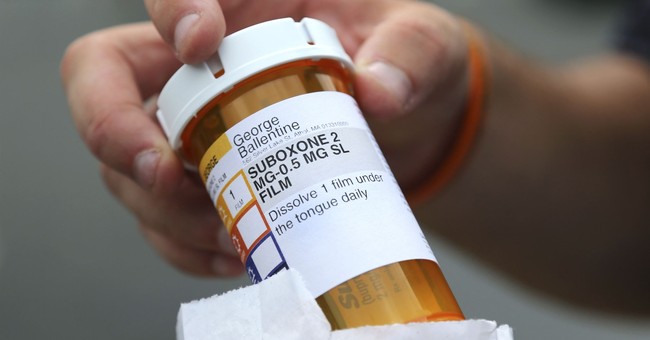 In this July 23, 2018, photo, newly-released inmate George Ballentine holds his prescription medicine Suboxone outside a pharmacy in Greenfield, Mass. While serving his sentence at the Franklin County Jail, Ballentine received a daily dose of buprenorphine (Suboxone) to control his heroin and opioid cravings. His doctor hopes to soon take him off the medication he’d been on for his last two months in jail. (AP Photo/Elise Amendola)

One of the great underreported stories of the last three years is the incredible progress that the Trump Administration has made battling the scourge of overpriced prescription drugs since he took office just over three years ago.

President Trump accused Big Pharma of “getting away with murder” just before being sworn in, and since then has made reining-in skyrocketing drug prices a top priority.  And, while there is still much to be done, President Trump did what no living president was able to do: lower drug prices.  In 2018, for the first time since 1973, the retail price of prescription drugs fell year-over-year.

One of the primary drivers of that price decline?  Increased competition from lower-cost generic drugs.  From the first days of the President’s term in office, getting more generic drugs into the market has been the backbone of the Administration’s efforts to reduce drug prices, and the results are clear: the Council of Economic Advisors estimates that, “if the increase in drug approvals that occurred in 2017 and 2018 continues, it will produce cumulative benefits for consumers of between $175.6 billion and $300.1 billion.”

To tackle the problem of high drug prices, the President looked at challenges within the drug approval process. When President Trump took office, there was a backlog of generic drug applications waiting for approval by the U.S. Food and Drug Administration (FDA), meaning that there were a large number of cheaper prescription drugs ready, but regulatory red tape was keeping them out of the hands of patients who needed them.   Since the beginning of the Trump Administration, however, the FDA has approved a record number of generic drug applications in each year of President Trump’s term.

Those tremendous accomplishments, however, are under threat from an effort in Congress that will put the brakes on new generic drugs.  New legislation is threatening the incentives and protections that encourage generic manufacturers to invest in new drug applications and enter the market. It is a technical but important issue that could reverse the Administration’s gains going into an election year where drug prices are a top-of-mind issue for voters.

Generic drugs are essentially copies of brand-name drugs whose patents have expired.  Naturally, because those brand-name drug patents are very lucrative for Big Pharma, drug manufacturers that want to introduce a generic drug have to launch a costly and risky court battle with deep-pocketed brand-name drug companies to defeat their patents.

The so-called BLOCKING Act would threaten that 180-day head start and the incentive for a small generic manufacturer to spend millions of dollars on uncertain legal challenges to enormous drug companies’ patents.  That will mean fewer generic drugs and more patients that can’t afford the medicines that they need.

Like I said, this is a technical issue, but it is also a very important one.  As the White House said last fall, “competition from generic drugs is an important factor behind falling prescription drug prices,” and the BLOCKING Act threatens that competition.

The President’s accomplishments in bringing down drug prices have been dramatically under-reported.  The flood of new generics on the market – more than 90% of which are available for co-pays of under $20 – is a signal accomplishment and one that is not only good for American patients, but also for the President’s political prospects.

The BLOCKING Act is an unnecessary and misguided piece of legislation that will only help the Big Pharma companies continue to get away with murder at the expense of American patients, and the President and his allies in Congress should do all they can to ensure that it does not become law.

Jesse Grady has worked with the RNC, Trump Campaign, Texas GOP, and the NC GOP. He now lives in Baltimore and studies law at the University of Maryland.

Peter Doocy and Jean-Pierre Get Into Heated Exchange Once Again
Townhall
A Twitter user posted CHANI's career benefits and people have questions … and jokes
Twitchy
Kari Lake Drops the Hammer on Liz Cheney After Pathetic Attack
Redstate
CNN to Be Sold to Fox News? That Would Be Hilarious
PJ Media