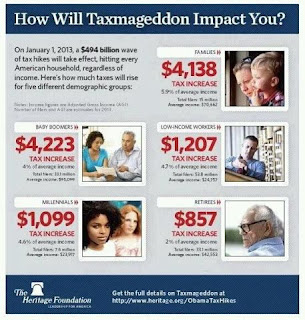 I wrote a blog about this back on Janurary 23,2011 Entitled: Obamacare Is A Bad Bill and Wrong For America.  In that blog, I did my best to sound the alarm and warn my fellow Americans about how bad of a bill Obamacare really was.  Unfortunately, almost 51% of Americans either didn’t read it, don’t care or think they won’t be effected by it.  They’re wrong.  Here is what we do know now after the 2012 election about Obamacare.  The latest RealClearPolitics Poll (as of 11/4/12) about Americans Who Favor or Oppose Repeal of Obamacare.  That Poll is suggesting that even with a slight 5.4% improvement since the last poll, Most Americans still do not favor Obamacare.  With 47.8 Against it and only 42.4% favoring it.  This improving trend will end once the effects of Obamacare are felt not just feared.  Some have starting feeling these effects already.  The overall lasting effects will effect everyone.  Rich, poor, tall, short, white, black, male, female, gay, straight, christian, jew, catholic, muslim, republican, democrat, independent, libertarian, undecided and everyone else.  Just ask the list of companies that have annouced layoffs or closings since Obama won second term.  Ask them about the intial effects of Obamacare.  Ask their families and friends how they feel about Obamacare now. This list of layoffs from Obamacare is extensive, well documented and easily researchable.

That is just the beginning.  The effects Obamacare will have on every American will get worse before it gets any anything else.  As of October 1st of 2012, Hospitals who re-admit patients within 30 days after they were discharged will now have to, under an Obamacare provision, pay fines as of October 1, 2012, which could force hospitals to slash programs that help the elderly, the poor, and the chronically ill.  As Reported by Breitbart, Washington Post and the Examiner just to name a few credible sources.

According to a study, “about two-thirds of the hospitals serving Medicare patients, or some 2,200 facilities, will be hit with penalties averaging around $125,000 per facility this coming year.”

This provision was inserted into Obamacare as a cost-cutting measure, but it will force hospitals to give the poor, elderly, and chronically ill substandard care.

In addition, critics also note that “large teaching hospitals that are affiliated with universities” could be negatively impacted the most because these hospitals are often on the front lines in dealing with the elderly and the poor in addition to people who have mysterious illnesses who constantly need to be re-admitted to the hospital for urgent care.

As if the Layoffs and Penalties averaging around $125,000 per facility this coming year is not bad enough.  I am really just getting started in this blog to open your eyes and reveal just how bad Obamacare is for everyone in America regardless of who you are or who you voted for in 2012.

Over 171,000 Retirees are likely to lose Tricare Prime now that Obamacare is as Speaker of the House of Congress likes to say “The Law of the Land”  How brave is he?  I’d argue that Mr. Boehner may be a very nice man, however, he is not a brave man or smart at all.  Quite the opposite actually.

. . . Research published in the Annals of Family Medicine estimated that most  of the doctor shortage will be caused by the rising U.S. population.

Aging adults and the expansion of healthcare coverage under the Affordable  Care Act will contribute to a lesser extent, the study found.

Researchers predicted that the U.S. population will increase 15.2 percent by  2025, necessitating about 33,000 more physicians.

Aging adults will create the need for an additional 10,000 physicians in that  period, while the Affordable Care Act will require about 8,000 more.

*Immigration is inferred. The birth rate for the United State was 1.89  children per woman in 2011, which is well below the replacement rate of 2.1.”

Read More about this Study HERE*

John Mertz, who “runs approximately 40 Denny’s and owns the Hurricane Grill & Wings franchise” says he is planning on charging customers a 5% Obamacare Surcharge to pass the cost of Obamacare on the customer.

The force of the government to tell insurance providers they have to cover  pre-existing conditions will only aggravate the problem, for it will increase  the costs to everyone in the system.  That is how they make up the difference to  cover it.  You can bet your bottom dollar the feds will not allow the insurance  companies to really stick it to those with pre-existing conditions.  No, in the  world of Obama, it’s the communist ideology that the rest of us will have to  bear the burden of some of that additional cost.

That cost has many governors are taking a stand refusing to get on board or cooperate with Obamacare by not creating their own health  care exchanges to administer Obamacare or let the federal government do  it.
So far, only 17 states have told the White House they plan to move  ahead with their own programs. Eight governors have already rejected state plans  or decided to work with Washington in creating hybrid state-federal  exchanges.  States like Texas, South Carolina, Alabama, Montana, Wyoming, Ohio, Florida and South Dakota have all voted to Nullify Obamacare in their states so far.  Making America more divided than before the 2012 elections.  There are 30 Republican Governors across America who could and SHOULD stand firmly to their 10th Amendment right to protect their states from the costs, regulations, taxes and overall burdens that Obamacare will place on all of the people within their states.  That is their job and duty to do what is in their state’s best interests.  This is still America.  In America, we still have this option and protection granted by our founders through the constitution.

I think I will take this time to remind some of you reading this who think or feel that Obamacare is the “Law of the Land” and Should be treated as such.  The Supreme Court did find it Constitutional and a “Tax”.  Only 5 of the 9 Supreme Court Justices Approved of Obamacare as a “Tax”.  There were still 4 Supreme Court Justices who absolutely rejected that argument and Dissented Against it.  More Proof and Evidence over how divided America is right now.  Another great example as to why we can’t leave any more important issues like this up to the federal government to decide.  The federal government has been failing to step up and do the right thing for Americans for awhile now.  It’s just been one dishearteding after another after another.  It is time for patriots of this country to get creative and find other ways to fight tyranny here in America.

I don’t know what creative way patriots will find to fight against this federal tyranny we’re facing but I do know we’ll continue to fight, battle and combat tyranny until our last dying breathe.  It is who we are and what we’ve always done.  Americans have a proud history of stepping up and doing the right thing when push came to shove.  America overcame slavery, women’s right to vote, civil war, two world wars and many other wars after that.  Americans rise to challenges.  I have all of the confidence in the world, Americans will rise again to meet this challenge of Obamacare.

Here are some additional Links I find Valuable to this Obamacare discussion:

During the International Franchise Association convention in Washington, D.C., in September, franchisers learned just how hard Obamacare would hit them. David Barr, a Taco Bell and Kentucky Fried Chicken franchiser, told the group how Obamacare will cut his profits and probably theirs as well — in half. Their only choice is to slash employee hours so they aren’t eligible for company-paid health insurance or stop offering insurance and pay the $2,000 per employee fine.

Darden Foods, the world’s largest casual dining company — it includes Olive Garden, Red Lobster and LongHorn Steakhouse — was one of the first to announce it would be limiting worker hours to avoid healthcare requirements. Papa John’s CEO John Schnatter said the cost of his pizzas will rise between 11 and 14 cents and worker hours will be reduced. He expects the law to cost his company between $5 million and $8 million annually.

In July, McDonalds Chief Financial Officer Peter Benson said Obamacare will cost his company $420 million in new healthcare costs even though the company received a waiver from the Administration of Barack Obama. His menu prices will increase as a result.

Florida-based restaurant owner John Metz, who owns 40 Denny’s restaurants and the Hurricane Grill & Wings franchise, said last week he would be tacking a 5 percent Obamacare surcharge on his meals and reduce employee hours. He says it is “the only alternative. I’ve got to pass the cost to the customer.”

Look for other restaurants faced with a choice of becoming unprofitable by absorbing the costs or uncompetitive by raising their menu prices if they insure their employees and pass the cost to consumers to also cut worker hours.

Wal-Mart recently raised its health insurance premiums as much as 36 percent, putting coverage out of the reach of many of its employees. Its executives say employee hours will be cut. Likewise, the Kroger grocery chain is also reducing employee hours.

According to Page 113, Line 22, Obamacare DOES EXEMPT the President, Senators, Congressmen and their famlies.  As well as Unions, Muslims and 825 Democrat Donors to Obama’s Political Campaign.  Is that fair?  Does that make any kind of sense to anyone? 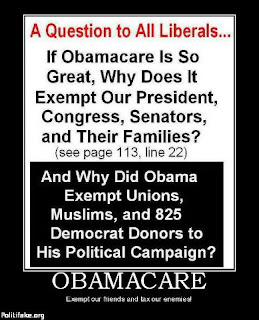 The government will stop paying for your health care at some point; the only question is when. 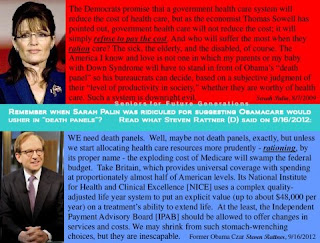 Here is what the So-Called “Death Panel is. 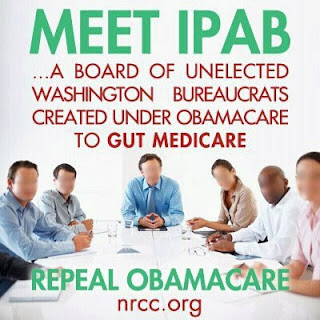 Here are the Top 5 Ways Obamacare Will Hurt Average Americans. 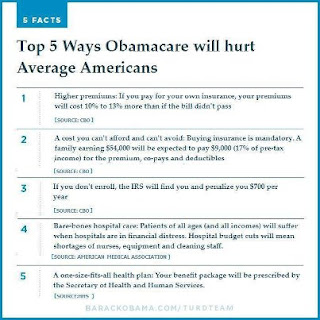 Thank you for taking the time to read my blog about Obamacare.  I do appreciate the time you took to read about this vital issue.  It does effect you and everyone close to you that you personally know.  This is not some made up blown our of porportion issue by tea party right wing extremists.  Obamacare effects all of us.  Every American citizen will suffer through Obamacare until it is repealed and replaced with free market patient-focused solutions.