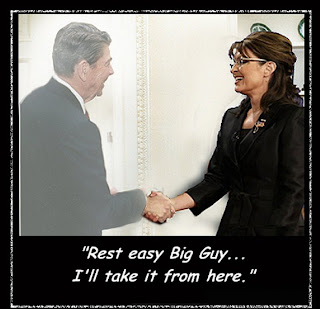 Sarah Palin is not facing a Jimmy Carter Economic Malaise or a Cold War with Communist Russia like President Ronald Wilson Reagan did back in the Late 70s and Early 80s.  Sarah Palin is facing a Obama led Economic Nightmare and America is at War with three Countries ( Iraq, Afghanistan & Libya) where America has Troops on the Ground fighting Islamic terrorists still trying to  kill as many Americans as possible.    If that wasn’t bad enough, Sarah Palin will also have to have the added task of Repeal, Defunding and Replacing ObamaCare.  Something she has spent the last two and a half years desperately fighting tooth and nail to defeat.  Sarah Palin understands Military Policy/Foreign Policy and National Security.

Sarah Palin also didn’t start her Life in Public Office as a Well Known Big Screen Hollywood Actor, Commentator for General Electric or Govern over a Government the Size or Population of California like Reagan did either.    Palin’s performance as mayor of Wasilla, cutting taxes while expanding the town’s facilities so that it could grow, would be anything but a plus. Just so her role as a member of the Alaska Oil and Gas Conservation Commission. She outed two corrupt officials, one of whom was chairman of the state Republican Party.

Was she wrong in running for governor to oust a corrupt and wasteful officer of her own political party? Was it lack of wisdom which led her to sell the state plane, cut expenses of her office by 75 percent and pass a bipartisan ethics bill? Was she impolite in chasing away the oil company lobbyists so that she could start work on a stalled pipeline for natural gas? Not likely. – Jedediah Bila

I’m not the only Conservative who sees similarities between Reagan and Palin.  There are other Conservatives who have gone on public record saying they see something there also.  Conservative talk radio show host, best selling author and founder of Landmark Legal Foundation, Mark Levin sees similarities also.  Mark Levin talked to Movie Director Steve Bannon about these similarities again when discussing Sarah Palin’s New Documentry Movie about Sarah Palin called ‘THE UNDEFEATED’.  The reason why I mention that or even bring up Mark Levin’s Support for Sarah Palin and seeing similarities between her and Reagan is because Mark Levin was a Big Part of the Reagan Revolution and also worked several different posts within the Reagan Administration.  Mark Levin was there and he would know.

The Betfair Contrarian Wrote this about Sarah Palin’s Chances to Win the GOP Primary in 2012: “Palin is the antithesis of Obama”  Going on further to say:  “Running mates often go on to be presidential candidates

If reality TV voting patterns aren’t enough to convince you, there are a fair few examples of running mates, as Palin was for McCain in 2008, going on to stand for the presidency further down the line. Some, like Lyndon Johnson and George Bush I, succeeded victorious candidates, but it is not unheard of for running mates in unsuccessful campaigns to later earn a chance to stand for the big job, with Bob Dole a recent Republican example, battling with Bill Clinton in 1996 having previously been part of a failed Gerald Ford bid.” 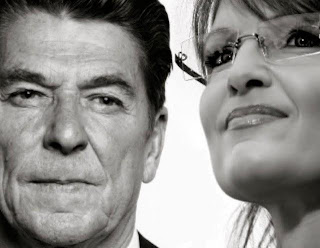 Sarah Palin has been very active and super busy since resigning as Governor of Alaska.  Palin continued to discuss important issues and topics through her social networking sites like Facebook, Twitter and Youtube.  Sarah Palin’s Facebook page has over 3,177,046 people watching her daily, Palin has over 589,657 Followers on Twitter and 1,975 Subscribers to her Youtube Page.  With over 325 Notes Posted on Facebook and ReTweeted on Twitter, 45 Plus Usernames attributed to supporting Sarah Palin along with at least 10 Hashtags, 76,895 Channel views, 1,353,800 Uploaded Videos from Youtube.  The Numbers Don’t lie and Numbers do mean everything in this day and age where every politician, market, business or product is trying their best to be noticed on Facebook, Twitter and Youtube.  Sarah Palin has the Most Organized and Best Established Social Networking Status/Name Recognition than any other GOP Candidate in America today.
She Authored Three Best Selling Books and made a Documentary Movie about her Success in Alaska and Now call ‘The UnDefeated’.  ‘The Undefeated’ is doing so Well Now $11,000-plus per screen weekend averages in Orange County and Phoenix that is it expanding to More cities to reach More Audiences across America.

To sell Sarah Palin short or try to limit her to just being a queenmaker aka GOP Cheerleader for other Republican Candidates is to Underestimate Who Sarah Palin is.  It really bothers me to no end when I hear Republicans, Conservatives or Independents say “I really like Sarah Palin personally but I think she’d be a better fundraiser for other Conservative Candidates.”  or “Sarah Palin is too polarizing to get elected because the Independents hate her and the Media trashes her non-stop.”  I Say “Tell that to the Independents for Palin Group on Facebook with over 2,253 Members Supporting Palin.”  And according to Elites Way Off on Palin Electability: Part 1 – The Floor – Pollinsider, Sarah Palin is Prime for another big splash into another GOP Primary only this time, Sarah Palin is the top of the ticket and it’s her show to run. 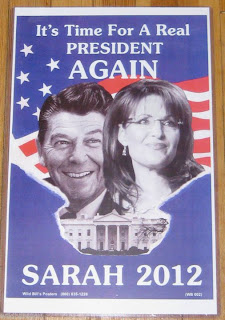 President Reagan is known as ‘The Great Communicator”.  Reagan’s Known for his great articulation of his Conservative Principles, values and Moral Standards.  I’d argue that Sarah Palin was made in the same mold as Reagan in this department.  Sarah Palin has written some very Conservative and Patriotic Commentaries since 2009.  Some of those Commentaries include:
Remembering 9/11: We Are Americans · Friday, September 11, 2009,
Constitution Day · Thursday, September 17, 2009,
Commemorating a Victory for Freedom – Sunday, November 8, 2009,
In Honor of Those Who Sacrificed for Our Freedom – Tuesday, November 10, 2009,
US Troops Must be Second to None · Monday, November 23, 2009,
Faith, Family, Freedom: Remembering What Really Matters · Thursday, December 3, 2009,
Real American Stories · Thursday, April 1, 2010,
Memorial Day, to Remember Past and Present Sacrifice · Sunday, May 30, 2010,
Remembering D-Day · Sunday, June 6, 2010,
Peace Through Strength and American Pride vs. “Enemy-Centric” Policy · Wednesday, June 30, 2010,
Rendezvous with Destiny · Wednesday, October 27, 2010,
Happy Veterans Day · Wednesday, November 10, 2010,
America’s Enduring Strength · Wednesday, January 12, 2011,
A Grateful Nation · Sunday, May 1, 2011,
Restoring the Good in America! · Friday, May 27, 2011,

Reagan may have had his commercials and speeches fueling the Reagan Revolution but Sarah Palin has the New Media, her Speeches and her Commentaries.  The Reagan Revolution brought us Mark Levin, Rush Limbaugh, Sean Hannity, Craig Shipley and many other Solid, Articulate Conservative Commentators.  Part of Sarah Palin’s New Media is Andrew Breitbart, Erick Erickson, Michelle Malkin, Jedediah Bila and Dan Riehl.  Both are effective and resonates with the hearts and minds of Americans.

“Sarah Palin first made history on December 4, 2006 when she was sworn in as the first female governor of Alaska. In August 2008, Senator John McCain tapped Palin to serve as his vice-presidential running mate in his presidential campaign, making her the first woman to run on the Republican Party’s presidential ticket.

Palin has a long record of achievement and experience in public office. Prior to her election as Governor, Palin served two terms on the Wasilla City Council and two terms as the mayor of Wasilla. During her tenure, she reduced property tax levels while increasing services and made Wasilla a business-friendly environment, drawing in new industry.

Under her leadership as Governor, Alaska invested $5 billion in state savings, overhauled education funding and protected Alaska’s natural resources. She created Alaska’s Petroleum Systems Integrity Office to provide oversight and maintenance of oil and gas equipment, facilities and infrastructure and the Climate Change Subcabinet to prepare a climate change strategy for Alaska.

During Governor Palin’s first year in office, three of her administration’s major proposed pieces of legislation passed—an overhaul of the state’s ethics laws, a competitive process to construct a natural gas pipeline and a restructuring of Alaska’s oil valuation formula.

Palin is past chair of the Interstate Oil and Gas Compact Commission, a multistate government agency that promotes the conservation and efficient recovery of domestic oil and natural gas resources while protecting health, safety and the environment. She also served as chair of the National Governors Association (NGA) Natural Resources Committee, which was charged with pursuing legislation to ensure state needs are considered as federal policy is formulated in the areas of agriculture, energy, environmental protection and natural resource management.

Sarah Heath Palin arrived in Alaska with her family in 1964, when her parents came to teach school in Skagway. She is married to Todd Palin, who is a lifelong Alaskan, worked as a production operator on the North Slope and is a four-time champion of the Iron Dog, the world’s longest snowmachine race. They have five children.

Born on February 11, 1964, in Sandpoint, Idaho, Governor Palin moved to Alaska with her family at the age of three months, when her father took a teaching position in Skagway, Alaska, before eventually settling in Wasilla. A graduate of Wasilla High School, Governor Palin was the co-captain and point guard of Wasilla’s 1982 state championship women’s basketball team. She received a Bachelor of Science degree in communications-journalism from the University of Idaho in 1987.

Palin is a contributor for FOX News where she offers her political commentary and analysis across all FOX News platforms, including FOX Business Channel, FOXNews.com and FOX News Radio. She also participates in special event political programming for FOX Broadcasting.

She is the author of The New York Times best-selling books, Going Rogue: An American Life (November 2009) and America by Heart (November 2010) and was named to TIME magazine’s 2010 “100 Most Influential People” list. She was also the host of the 8-week documentary series Sarah Palin’s Alaska on TLC.”
http://sarahpac.com/sarahs-story

These are the Candidates that Sarah Palin Helped,Supported and Endorsed through the Mid Term Elections.
http://sarahpac.com/candidates

While not having a Famous Celebrity Name like Reagan had, Sarah Palin earned her reputation in America the good old fashion way, She worked hard and got Noticed for it.  The 2008 GOP Nominee Senator John McCain could’ve picked anyone in America to run as his VP.  Anyone.  McCain had his pick of literally anybody in Congress or several Governors to choose from including Romney, Huckabee, Pawlenty and Jindal.  All showed some interest and probably would’ve accepted the position if asked.  McCain choose Sarah Palin because of Who she was and what she was able to do in Alaska as one of America’s Most Popular Governors.  Palin was doing alot Right and Not Much Wrong.  McCain looked long and hard before Finally and Correctly selecting Sarah Palin with the Steller Record to run with him for Vice President.  America took stock and noticed Sarah Palin right away.  Thousands of Americans Filled stadiums, arenas, parks and fairgrounds across America to come out and meet Sarah Palin. 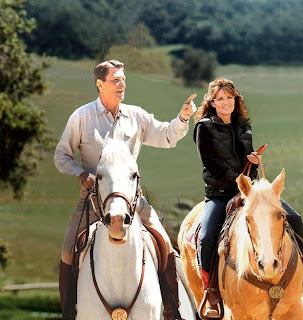 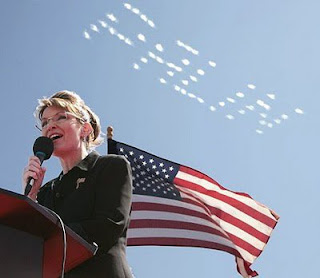 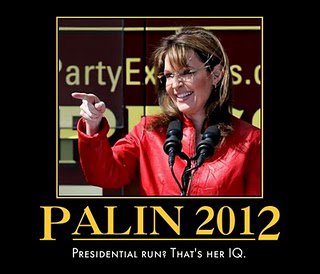 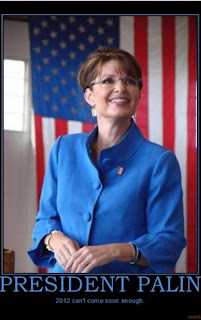 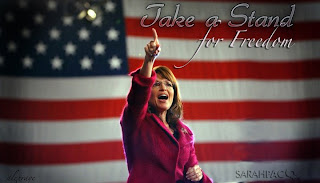 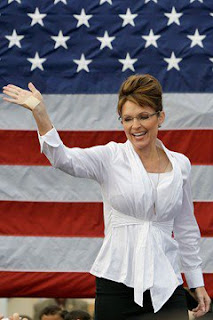 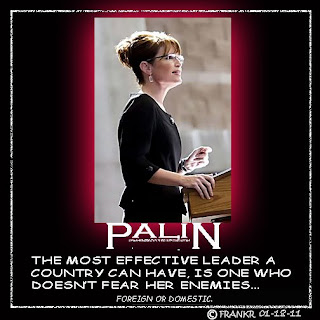 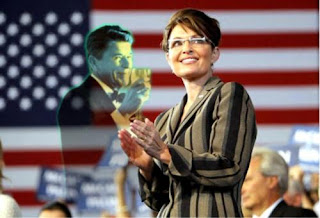 Reports: Taliban Decapitating Children and Hunting Down US Collaborators
Townhall
AUDIT UPDATE: Settlement reached over routers between Maricopa County and the Arizona State Senate
Twitchy
Ted Cruz Has a Question on the Droning of an Afghan Aid Worker That Must Be Answered
Redstate
Contradictions Gone Viral
PJ Media