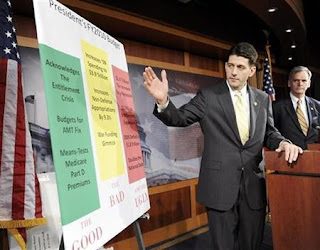 Paul Ryan may NOT be the Strongest, Most Consistent Conservative Republican that we have in the House of Representatives but he’s Not a Moderate Rino. Paul Ryan is Not the Worst either. He has made mistakes and he has done some really great things as well.
My Point is, At Least Paul Ryan Worked Many Long Hard Hours on a Budget Proposal that is actually Good. Rather than just talking in Vague sound bites of what could be done or needs to be done in the hypothetical world.  Many Politicians and Bureaucrats are not even doing that much.
So Ryan takes a shot at it and really hits a Home Run Ball right out of the box.

What Ryan is proposing to do with his budget proposal is Great when You look at it “By the Numbers” written April 5, 2011 10:50 A.M. By Andrew Stiles of National Review Online.
And here’s what the Numbers say Representative Paul Ryan’s Budget Proposal does IF Accepted:

Paul Ryan’s 2012 budget, “The Path to Prosperity,” is an impressive document aimed at fostering economic growth and sustainable government. Here are some of the numbers that jump out:

20 percent — Target spending levels (as a percentage of GDP).

$178 billion — Amount of saving achieved in the Defense Department budget, per the recommendations of Defense Secretary Robert Gates, $100 billion of which would be reinvested, the rest used to reduce the deficit.

$750 billion — Total savings achieved through Medicaid reform, in the form of block grants to states, giving governors greater flexibility in their budgets.

25 percent — The top tax rate proposed for both individuals and companies.

18-19 percent — Target revenue levels (as a percentage of GDP), in keeping with historic average levels.

1 million — Private-sector jobs created over the next year.

$1.5 trillion — Projected growth in real GDP over the next decade.

$1.1 trillion — Estimate increase in wages over 10 years, yielding an average increase in income of $1,000 per year for each American family.

10 percent — Proposed reduction to the federal workforce over the next three years. 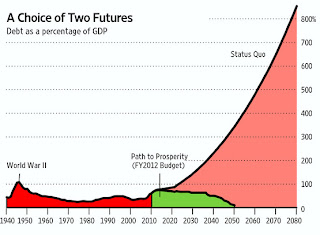 If that doesn’t impress you, This is what Representative Paul Ryan had to say in defense of his own proposal:
Read Full Blog Post at:  http://t.co/T7Pk4bm