The Difference Between Republicans and Democrats...This Needed to be Said 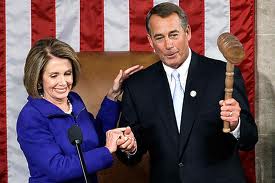 I Wrote this in Direct Response to Those I’ve Come Accross Lately Who Worry/Fear Both the Republican AND The Democrat Parties. This Note is a Reponse to those Who Say “There’s NO Difference Between the Parties….They’re Both Equally Corrupt!” or “Republicans & Democrats Can BOTH be Progressives!”

THIS NOTE IS FOR YOU!

To Say Any of the Above Right Now When the Republican Party is Clearly in a State of Tranformation into a MORE Conservative Party through the Grassroots Energy of The Tea Party Movement, is Ignorant and Reckless.
A More Careful/Thoughtful Analysis of the Current Political Spectrum in Washington Would Clearly Show You a Republican Party that is FINALLY Fighting Back Against the Tyranny of Obama, Pelosi and Reid. With an Rare Exception of 3 RINOS/MODERATES in the Senate. The Republicans Have Unified their Positions & Holding the Line Against Obama, Pelosi & Reid’s Radical Push to the LEFT! It’s Clear as Day! It’s Also Public Record & All over the News.
Republicans are even being Labeled/Branded “The Party of NO” and being in Favor of “The Status Quo” because of their Defiance.
If Conservatives Are EVER going to take back over the Control of Republican Party with another Reagan Style Conservative Revolution, Doesn’t that Mean We All Need to Hunker Down & Focus Our Efforts in Uniting Around/Behind Strong, Solid, Articulate Conservative Candidates Who Are Willing to Take Leadership Positions Within the Party & Govern on Their Conservative Principles?
What’s the Point of bashing ALL Republicans along with Bashing ALL of the Democrats?
What’s the Point in doing that?
That’s a Waste of Time and Effort.