The Best Way to Stimulate the Economy...Reagan's Way! 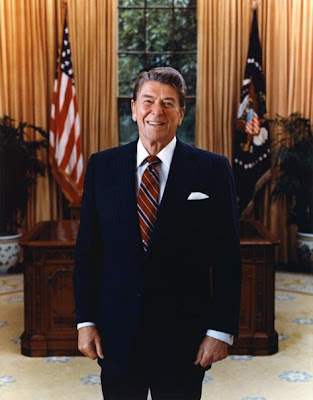 The Best Way to Stimulate the Economy would be for the Federal Government to Slash Capital Gains Taxes, Corporate Income Taxes, and the Individual Income Tax Rates, thereby increasing Liquidity available to Individuals and Businesses to Make Decisions about Their Own Economic Circumstances.In 1981, President Ronald Reagan Championed the Passage of the Economic Recovery Tax Act (The Kemp-Roth Bill). It Cut individual Federal Income Tax Brackets by 25 percent, Phased Over Three Years, and Indexed the Rates against Inflation to Prevent Creeping Bracket Increases in Future Years. The Act also Instituted the Accelerated Cost Recovery System and a 10 Percent Investment Tax Credit, which led to a Substantial Increase in Capital Formation. The Goal was to Create Incentives by Removing Significant Government Barriers to Investment, Productivity, and Growth. The Result: Inflation Dropped from 13.5 percent in 1980 to 4.1 percent in 1988. Interest Rates dropped from 18 percent on a thirty-year fixed mortgage in 1981 to 8 percent in 1987; and Unemployment dropped from a peak near 10 percent in the recession of 1981-82 to 5.5 percent in 1989, once the full force of the tax cuts kicked in.* The Reagan economic program, based largely on free market principles, spurred economic prosperity that created, over the next twenty-five years, forty-three million jobs and $30 Trillion in wealth.http://townhall.com/columnists/georgeallen/2007/08/13/reagan_tax_cuts_lifted_americans
+ Source is: Editorial, “Still Morning in America,” Wall Street Journal, Jan. 20, 2006, A14.In The Free Market, A Man Born into Wealth or who has otherwise acquired Great Riches can lose his fortune depending on how he chooses to behave. Conversely, a Man Born into Poverty or who has lost wealth once obtained can acquire a fortune, depending, again, on how he chooses to behave. When the individual or even a large business makes a wrong decision, its impact is limited and more easily absorbed by the free market. However, when the Statist makes a wrong decision, its impact is far-reaching, for he uses the power of government to impose his decision on as many individuals and businesses as possible, which distorts the free market itself.
Read Full Post at:  http://t.co/wup0V6s
Share
Tweet
Tags: AMERICA CONSERVATIVE CONSERVATIVES CUT TAXES ECONOMICS ECONOMY
Register Login to Comment
TRENDING

There May Be Weeping and Gnashing of Teeth: Missouri House Approves 'Rush Limbaugh Day'
Alex Parker