Reagan, Obama and the Sign of the Times Ahead! 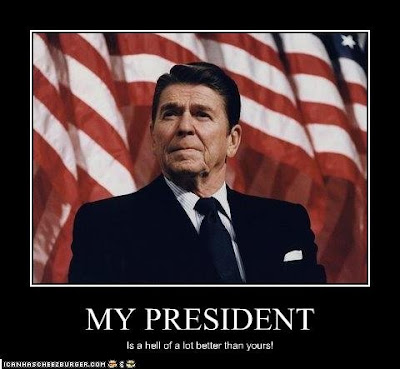 What an Exciting Time it is to be a Conservative living in America Today.
The America I Knew When I Was Growing Up is trying to Change into something Foreign that I Find Harder and Harder to Identify Myself With.
I Grew Up during the Reagan Years. I Have Such Great Loving Memories of President Ronald Wilson Reagan.
President Reagan Left Such a Huge Impression on Me.
I Naturally Thought Every President Would be like him. To Me, Anything and Everything Was Possible to Reagan as Long as it was God’s Will and Good for the American People.
Reagan Relied on the Strength of the American People to Defeat Evil while He was Our Commander in Chief.Reagan was America’s Most Popular President over the Last 40 Plus Years. Reagan Won Two Landslide Victories. They Weren’t Even Close. Reagan First Smoked Jimmy Carter in 1980 with 90.89% of the Electoral Votes or 489 Electoral Votes to Carter’s 49 and then Went on to Cream Walter Mondale in 1984 with 58.8% Carrying 49 States to a Total of 525 Electoral Votes to Mondale’s Pathetic 13 Electoral Votes. That is What IS a True Landslide. Not Even Close. No Doubt. Reagan Was America’s President.*

Compare that with What Obama Calls His Victory over Sen. John McCain in 2008 with ONLY 52.7% to McCain’s 46%. A Difference of ONLY 6% is NOT a Mandate or a Landslide Reagan-Like Victory. Obama was just able to get a few More Woman to Vote for Him with 56% to McCain’s 43% and the Younger Crowd Took to Obama More than McCain as well with 18-27 Year Old voting 66% For Obama to 32% For McCain. It was Much Closer in almost Every Other Demographic which include Men, Voters Older than 27.+