AFL-CIO Joins Marxist/Progressive Get Out the Vote Alliance 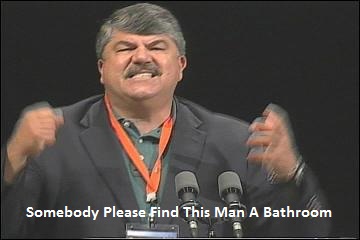 On the national level it seems as if the Unions have changed priorities. No longer is their primary objective to protect the rights of their own rank and file, their objectives has moved into politics and selling the progressive and/or Marxist agenda. Hence their support of many of the Administration’s policies such as Obamacare, the auto bailout and the financial regulation bill in some cases (such as Obamcare) over the objections of their membership.

Fresh from their recent wins, the unions are moving into building the base of Marxist, Communist and progressive voters, as evidenced by the AFL/CIO joining a get out the vote effort run by United for Peace and Justice, an origination established to promote an agenda which is both socialist and anti-war.

The announcement the AFL-CIO move was made in People’s World a magazine for the Marxist and Communist movements in the United Sates:

The AFL-CIO executive committee voted unanimously this morning to join One Nation, Working Together, a new national coalition of labor and civil rights groups that has as its purpose to “reorder America’s priorities by investing in the nation’s most valuable resource – its people.”

The labor, civil rights, environmental, faith and other organizations that have formed the new coalition intend to replace unemployment and economic crisis faced by the country’s majority with “nothing less than a future of shared prosperity for all our people,” the AFL-CIO said in a statement after it voted to join One Nation.

“None of us alone have been able to achieve our priorities,” said Richard Trumka, president of the AFL-CIO.

One Nation’s first official act as a coalition will be a march on Washington on Oct. 2, which unions say will energize an army of tens of thousands who will return to their neighborhoods, churches, schools and voting booths to prevent a Republican takeover of Congress in November and begin building a new permanent coalition to fight for a progressive agenda.

The AFL-CIO joins groups such as The NAACP, SEIU 1199, Green for All, National Council of La Raza, US Student Association, and the Center for Community Change in the One Nation, Working Together effort.

The One Nation, Working Together get out the vote movement is led by United for Peace and Justice

You can tell the objectives of an organization by its friends, according to United For Peace and Justice they seek friends who are for “social justice,” “globalization”, and who are against multi-national American corporations.

UFPJ will seek to strengthen our alliances and working relationships with other forces in the antiwar movement, as well as the movements for global economic, environmental and social justice. Our international work will be based on respect for the sovereignty of other nations and a commitment to human rights and international law. We will support and seek cooperation with our sister organizations around the world, and we will act in solidarity with progressive groups and individuals within the United States and the nations occupied by U.S. forces.

The AFL-CIO’s new partners in this get out the socialist vote effort,  the UFPJ’s Steering Committeecome from Marxist, progressive, or communist groups including Code Pink, Institute of Policy Studies, Western States Legal Foundation, Wisconsin Network for Peace and Justice, Communist Party USA, Alliance for Community Trainers, American Friends Service Committee, Brooklyn For Peace, National Immigration Solidarity Network, Desis Rising Up and Moving,  and US Campaign to End the Israeli Occupation just to name a few.  At least two of the groups, Solidarity and US Campaign to End The Israeli Occupation, also have a history of Antisemitic activity.

These are the people and organizations that the AFL-CIO has linked up with.

There is absolutely nothing wrong with Marxists, progressives, or even Communists leading a protest to motivate their supporters to come out and vote for their favored candidates. What is wrong is when union leaders to support these groups without the full knowledge and understanding of their membership. When they join up with UFPJ, by association the AFL-CIO is endorsing the agendas of Marxist, Communist, and progressive groups, whose objectives are social justice,” world-wide redistribution of income (taking money out of their pockets and giving it to workers of less-developed nations) and who are against the multi-national American corporations who sign their paychecks.

I would suspect that the AFL-CIO’s new bedfellows are not being shared with their rank and file, who still believe their leadership is working on solving the problems unique to their unions rather than promote themselves as power brokers for the radical left.

eff Dunetz is Editor/Publisher of the The Lid, and Contributor to: American Thinker, Big Government,Big Hollywood, Big Journalism, Big Peace,Red Statediarist,and proud to be one of the Blogs Lucianne Loves