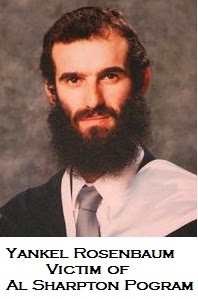 Al Sharpton is a professional bigot. During his long career the Reverend has incited two anti-Semitic pogroms; the Crown Heights riot and the firebombing of the Jewish-owned Freddy’a Fashion Mart in Harlem. Each of the Sharpton-incited pogroms resulted in deaths, but now for some unknown reason Reverend Al believes he is the caretaker of religious tolerance in the country, as well as the protector of Reverend Martin Luther King Jr’s legacy of peaceful protest.
Sharpton’s bigotry and hypocrisy has been front and center recently as on one hand he campaigned for what he saw was the First Amendment rights of Muslims who want  to build a Mosque 500 feet from the ground zero footprint, but on the other hand, he bashed Glenn Beck for organizing a religion-themed rally from the steps of the Lincoln Memorial on the anniversary of Reverend King’s “I have a dream speech.”
On a  local news program earlier this week Sharpton said the developers of the mosque need to be treated the same as any other religious group.

“Sharpton said he was concerned about recent criticisms and that misinformation was confusing the debate. He said preventing an Islamic group from building near the World Trade Center site ignores the fact that the September 11th attackers targeted people of all faiths. Sharpton said at its core, the controversy is about protecting religious freedom in our country.
If we begin to appear that we are going to tell people that the right to religious beliefs and practices stops at certain places, stops two blocks within an area that we had one of the most despicable acts in human history, but you don’t have religious freedom here, then I think the terrorists won that day and I think that we need to be careful of what we’re projecting,” said Sharpton.”

Sharpton is espousing a legitimate point of view, a hypocritical one coming from his mouth (and not one that I agree with), but it is certainly legitimate.
It’s also hard to accept a message of tolerance from a man who once called Jews “diamond merchants” in order to rally a crowd to riot against the  Jews in Crown Heights. He called Freddy’s Fashion Mart’s Jewish owners “bloodsuckers” and “white interloper”, leading protesters to shout, “We’re going to burn and loot the Jews.”  Just a short time later they got their wish, the store was firebombed and eight people were dead. 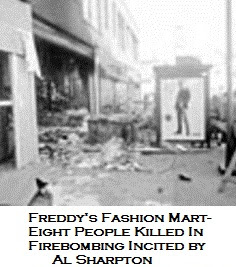 Jews are not the only target of this self-proclaimed arbiter of Martin Luther King’s legacy,  Glenn Beck and the planners of the 8/28 rally are more recent additions to his “hit list.”  Beck is planning a rally to be held in front of the Lincoln Memorial 47 years to the day after  Martin Luther King Jr. delivered his famous “I Have a Dream” speech.
The rally called “Restoring Honor,” is not designed to be political It is a non-denominational call to restore God to his rightful place in the lives and hearts of Americans. To make sure it doesn’t become political, Beck has asked attendees to leave their signs at home because the rally’s purpose was to, “honor the troops, unite the American people under the principlesof integrity and truth, and make a pledge to restore honor within ourselves and our country.”
Beck further says that the date was not a conscious choice; it was a weekend and a Saturday that fit his both his schedule and that of his staff.

“He said he had initially planned the event for Sept. 12 and then realized it was a Sunday. “I’m not going to ask anyone to work on the Sabbath,” he said. He rescheduled the rally for Aug. 28 because it was the best day for the schedules of the people involved, he said.”

One would think that a man trained as a pastor would encourage a rally about restoring God into people’s lives, but not Reverend Al.

“Rev. Al Sharpton, president of the National Action Network — which is also planning a large march that day that ends in the same spot — has called Beck’s event an “outright attempt to flip the imagery of Dr. King.” Sharpton said Beck is “circumventing him and distorting him.”

Circumventing and distorting Dr. King’s imagery? This coming from a man who incited two violent riots resulting in the deaths of nine people?
Sharpton can’t  really care about Dr. King’s legacy; he has made a career of using bigotry and divisiveness, all to promote …Al Sharpton. Someone who truly cared about Dr. King’s teachings would build bridges across ethnic divides, Sharpton burns them. Although to his credit, Sharpton is a master at it. By fanning the flames of hatred, the fraudulent protector of Dr. King’s legacy can market his number one product; Al Sharpton, judge, jury, executioner, and professional bigot.
Reverend King was a man of peace and a man of God. His legacy is owned and protected, not by Al Sharpton, nor by African Americans, it is owned by all Americans who believe that  ”Jews and Gentiles, Protestants and Catholics”,  should “be able to join hands and sing” words of an old Negro spiritual. Just as they locked arms and marched together against bigotry in Selma, Alabama. 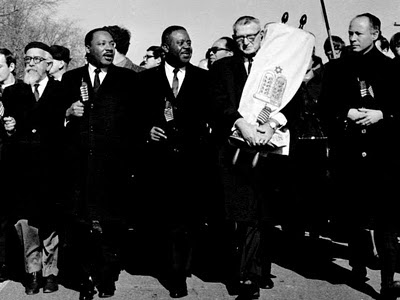 If he was alive today Reverend King would be standing on the steps of the Lincoln Memorial next to Glenn Beck, supporting a rally that is preaching his message, a love of God, inclusiveness of all people, and peaceful non-violent protest. That has never been the message of Al Sharpton.

“We must forever conduct our struggle on the high plane of dignity and discipline. We must not allow our creative protest to degenerate into physical violence. Again and again we must rise to the majestic heights of meeting physical force with soul force. The marvelous new militancy which has engulfed the Negro community must not lead us to distrust of all white people, for many of our white brothers, as evidenced by their presence here today, have come to realize that their destiny is tied up with our destiny and their freedom is inextricably bound to our freedom. We cannot walk alone.”– Reverend Martin Luther King Jr., August 28, 1963

Jeff Dunetz is Editor/Publisher of the The Lid,
Contributor to: American Thinker, Big Government,Big Hollywood, Big Journalism, Big Peace, Red State diarist, and proud to be one of the Blogs Lucianne Loves
Share
Tweet
Register Login to Comment
TRENDING