A coalition of liberal media watchdog organizations including Public Campaign, the Center for Media and Democracy and of course the progressive group Media Matters for America, has sent a letter to the White House Correspondents’ Association to reconsider Fox News’s front-row seat assignment in light of a $1 million donation by its parent company News Corp,  to the Republican Governors Association.

A letter from the coalition called the donation from News Corporation “a massive ethical lapse that demonstrates Fox News’ inability to function as an objective media institution.”

“What message does it send to reward a ‘news outlet’ that ideologically and financially supports the Republican Party with a place of distinction in the White House briefing room?” the letter said. “How is the country better served by continuing to disregard Fox News’ unabashed partisan tilt even as it becomes more and more obvious?”

If these organizations are going to protest the Fox seat, they need to also protest the seats of NBC, CBS, CNN and even ABC’s Jake Tapper, my personal front row favorite. In fact judging by the latest version of the Briefing Room Chart,  there are other rows who should be thrown out into the street also.

The overall trend shows that all the media conglomerates donated disproportionately more to Democrats from 1990 to 1994. In 1996, they began to favor Republicans with an average margin of about 8 percentage points until 2008, when Democrats had all six (including News Corp.) giving them half, or more, of all donations.

For this 2010 cycle the majority of funds have been donated to Democrats.  The charts below reflects the PAC and 527 committee dollars donated by media parent companies so far this year (and combined).

PACs and 527s are similar in that they’re both vehicles used to influence federal politics. But they differ in terms of contribution limits (527s have none) and how the money they raise is used. For example, while PACs may run advertisements expressly advocating for or against candidates, and endorse specific parties or candidates, a 527 must register with the Federal Election Commission in order to do so.

Contributions by individual employees of the companies are not included. What the charts show that most of the combined News Corp donations did indeed go to the GOP or Conservative groups but on the other hand the combined donations of the other five media groups gave their money to Democratic or Liberal candidates. 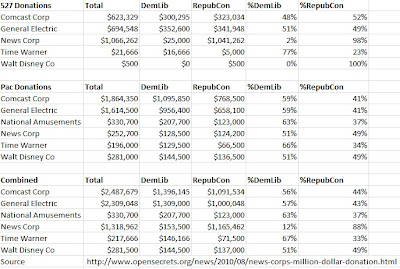 If however, Media Matters and its friends are going to bash Fox News for giving money to the GOP, to be fair, they should also be bashing the other News Organizations for the actions of their parent companies.