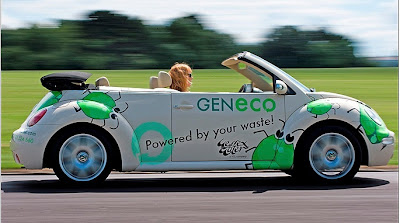 Some of you are going to doubt this story but I assure you, unlike the car pictured above, this story is not full of crap.

Scientists at Geneco have developed the ultimate dung beetle, a Volkswagen that is propelled via an engine using compressed methane extracted from Human waste.

The car’s engine is starts on regular unleaded gas and as soon as all the systems are warmed up, the methane takes over. Once the methane is used up, the engine reverts to using unleaded gasoline. According to Geneco, waste from 70 homes can generate enough gas to run the car for 10,000 miles, The car still produces carbon dioxide about 3 tons/ year compared to a regular car’s 3.5 tons. Since all of that carbon would have been released in to the atmosphere anyway, this new Poop-mobile is considered carbon neutral.

And the care even goes up to 114 miles/Hour. Usually bio-gas powered cars do not accelerate as well as the gasoline-powered ones.  The two-litre VW Beetle convertible is said to be the first gas-powered car that does not suffer reduced performance.

Mohammed Saddiq of Bristol-based sustainable energy firm GENeco, which developed the prototype, says it will pave the way for a green motoring revolution.

He boasts that it drives like a conventional car and will “blow away” electric models.

I bet it will leave all of the competitors, “Behind”

Mohammed said: “We thought it would be appropriate that the poo-powered car should be the classic VW Beetle Bug because bugs naturally break down waste at sewage works to start the treatment process which goes on to produce the energy.

“At the moment we use waste flushed down toilets but it won’t be long before energy will also be generated through treating food waste. It is probably the most sustainable car around.”

Now if they can figure out a way to cut out the processing part, this would be a great car to take on a long drive.

Jeff Dunetz is Editor/Publisher of The Lid
And Contributor to: American Thinker,  Big Government, Big Hollywood, Big Journalism, Big Peace, a  Red State diarist, and proud to be one of the Blogs Lucianne Loves