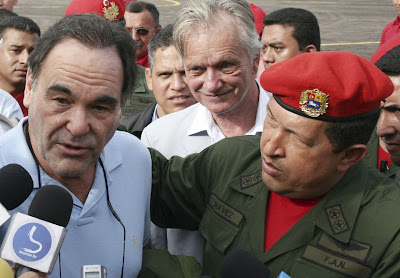 Back in January there was a warning. American Hating/Chavez loving director announced his ten-part documentary for Showtime, called “Oliver Stone’s Secret History of America,” by promising a different look at Adolf Hitler and Josef Stalin:

Hitler is an easy scapegoat throughout history and it’s been used cheaply,” Stone said at the conference. “Stalin has a complete other story. Not to paint him as a hero, but to tell a more factual representation. He fought the German war machine more than any person.I’ve been able to walk in Stalin’s shoes and Hitler’s shoes, to understand their point of view. You cannot approach history unless you have empathy for the person you may hate.”

Today, the other shoe dropped. In an interview with the Sunday Times of London, he blamed the Jewish-Dominated media for preventing Hitler from being portrayed in context.

“Hitler was a Frankenstein but there was also a Dr Frankenstein. German industrialists, the Americans and the British. He had a lot of support.”

He also seeks to put his atrocities in proportion: “Hitler did far more damage to the Russians than the Jewish people, 25 or 30m.”

Why such a focus on the Holocaust then? “The Jewish domination of the media,” he says. “There’s a major lobby in the United States. They are hard workers. They stay on top of every comment, the most powerful lobby in Washington. Israel has f***** up United States foreign policy for years.”

Why a focus on the Holocaust, because the Jews were singled out to be rounded up and killed only because of their religion. That’s not to say that Russians did not die, in fact more Russians died than people from any other country. So his “more damage to the Russians than the Jewish people” is merely an attempt to diminish the genocide Shoah by counting up dead bodies. No wonder why the director is a defender of Hugo Chavez who has put the Venezuelan Jewish Community in danger.

As for Stalin, now that Stone “walked in his shoes” he should realized that as leader of the Soviet Union Josef walked in Hitler’s shoes.  It is estimated that he killed between 20-30 million of his own people.

Stone’s father was Jewish, and it makes one wonder what Oliver Stones dad did to the young boy to make him spread Anti-Jewish stereotypical lies that the the Jews control the media and/or US foreign policy.

Dipsology: Beyond the Basics- In Defense of, or at Least Showing Gratitude Towards, the King of Beers

We're Over It: Government Has Lost Its Power with COVID Fear

Did a Co-Host for The View Realize She Blew Up the Liberal Narrative on ID Mandates This Week?
Townhall
'Entirely unacceptable': Fox News rips the NSA over a new report that says Tucker Carlson's name was unmasked
Twitchy
Watch: Fed up D.C. Police Chief Goes Nuts on Woke Leadership Killing His City
Redstate
Joe Biden Had the Opportunity to Denounce 'Defund the Police.' But He Says Something Disturbing and Unhinged Instead.
PJ Media