What Does President Obama Have to do With Jewish Fast of Tisha B'av That Starts Tonight? 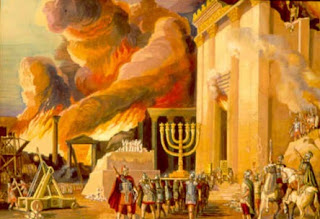 The Jewish Fast of Tisha B’Av begins Monday night at sundown and ends an hour past sundown on Tuesday. It is one one of only two full day fasts on the Jewish Calendar, the other being Yom Kippur.  Yom Kippur is considered a happy fast, Tisha B’Av is a sad mournful fast. Almost everything bad that happened to the Jewish people happened on Tisha B’ Av which is Hebrew for the ninth day of the month of Av.

Tisha B’Av is the culmination of a three week period of increasing mourning, beginning with the fast of the 17th of Tammuz (a half day fast), which commemorates the first breach in the walls of Jerusalem, before the First Temple was destroyed. During this three week period, weddings and other parties are not permitted, and people refrain from cutting their hair. From the first to the ninth of Av, it is customary to refrain from eating meat or drinking wine (except on the Sabbath) and from wearing new clothing.

Tisha B’Av always reminds me of my Mom. When I was a kid I would cry at the drop of the hat, my mom would tell me that if I continued to cry she would give me something real to cry about. I always thought that it was my mom who invented that expression, but in actuality it was God who invented it, and he invented it on Tisha B’Av

When Moses sent twelve spies into Canaan, ten of them came back with a report that the land was unconquerable. The fledgling Israeli nation could never defeat those Canaanite Giants, they claimed. There were cries throughout the Children of Israel asking Moses to take them back to Egypt. They forgot all about God, and his promise to help us conquer the land. That was the first Tisha B’Av. God’s response was not only the generation that knew slavery would die out in the desert, but Tisha B’Av will be a horrible day for the Jews, until the coming of the Messiah. In other words,like my mom God would give us something real to cry about.

From that day forward, horrible things have happened to the Jewish people on or around Tisha B’Av. Some of them include:

That first Tisha B’Av occurred because we didn’t trust God and his promise to give us the land of Israel. In a way our collective egos were too big, even if we felt that we were unworthy of God’s reward, as some scholars believe, it was still an ego issue. We felt that we knew better than God. That he wouldn’t keep his promise.

Thirty-five hundred years later we are still weighted down by our large egos. Many American Jewish leaders seek to gain favor from an anti-Israel President. Democrats who were Israel supporters refuse to stand up to this President and his policies designed to de-legitimize the Jewish State. Other psuedo leaders such as J-Street, are selling-out their people funded by billionaire George Soros, who was born Jewish but rejects its precepts and beliefs.

Thirty-five hundred years ago, Israel said they could not conquer the land and were punished. Today many Jews still show no faith in God and God’s promise. Even worse, support a United States President, who fittingly has his own ties to Tisha B’av, and who would seemingly have the Jewish State destroyed.

On this Tisha B’Av, as well as every other day, I will pray that we wake up before it is too late.