Traditionally it is housing starts and residential construction employment that lead the economy out of a recession. To date, the best you can say about those indicators in this recession is that they have leveled out near their low points. 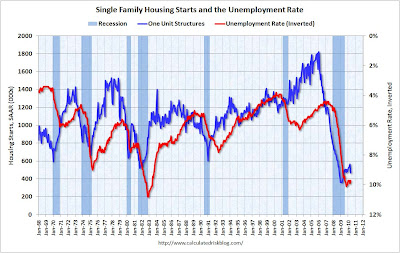 The President’s executive order, known as the “High Road Contracting Policy”gives preferential treatment to government construction contractors that pay their hourly workers a “union wage”  and provide additional benefits such as health insurance, employer-funded retirement plans and paid sick leave. In other words, the POTUS is “cutting out” the 85% of construction companies that are non-union shops out of the $500 billion dollar market of Federal construction Jobs. This move not only further depresses the Construction industry, but raises the cost of Federal construction projects between 10-20% increasing the federal deficit.

No longer will the federal government award jobs based on who does the best work at the lowest cost, now the decision will be based on who can best reward President Obama’s friends in organized labor. This President who likes to trump up anger against the job generators in corporate world is selling out to the less than 15% of America that belongs to a labor union. But then again, it is that 15% that got him into office and helped to force his healthcare bill down out throats.

Jim Elmer is the 2010 national chairman of the Associated Builders and Contractors, he says Obama is kicking construction when it is already down.

THE construction industry is bleeding.


Nearly a quarter of the nation’s construction workers are unemployed and contractors are facing a series of government mandates and proposals that will only serve to kick the industry while it’s already down.


At the heart of the hemorrhaging is the fact that the current administration seems to feel a need to pay back Big Labor bosses for their political support from previous elections at the expense of quality nonunion contractors and their skilled employees. One example is the recent final rule implementing President Obama’s Executive Order 13502, which strongly encourages federal agencies to require project labor agreements (PLAs) on select federal construction projects costing more than $25 million. This new rule is special-interest politics at its worst and will result in taxpayers paying more and getting less.


To put it in simpler terms, a PLA would deny 85 percent of the construction work force — those who do not belong to a union — the opportunity to work on federal construction projects funded by tax dollars, even when their own tax money is being used to pay for the project.


PLAs mandate that all hiring for these projects be executed through union halls, that all employees pay union dues and adhere to inefficient union work rules, and that contractors must pay into union benefit and pension programs — which their nonunion employees will never benefit from unless they join the local union.


PLAs further hurt taxpayers as they cause project costs to increase up to 20 percent when compared with similar projects that are not subject to these costly union-favoring agreements. In short, with PLAs, the public is building four schools for the price of five.


At the same time, the Obama administration’s Middle Class Taskforce is considering a “high road” contracting policy that favors unionized companies bidding on federal projects. Under this policy, the government would rate each contractor according to a set of factors that are based on subjective criteria suggested by Big Labor’s special-interest groups and think tanks. The practical effect of this policy will likely keep nonunion contractors from competing for federal contracts and creating jobs even if those same contractors have long-established positive working relationships with the government.


Another gift to Big Labor is President Obama’s Easter congressional-recess appointment of labor union lawyer Craig Becker to the National Labor Relations Board (NLRB), despite bipartisan Senate opposition. Becker has written in support of forcing workers to unionize and has advocated for the most radical theories of labor law far outside the mainstream — including severely restricting the free speech rights of employers.


As a member of the NLRB, Becker could muster support from fellow Democratic appointees to rewrite federal labor laws through litigation. In theory, Becker could change current law through the adjudication of specific cases before the board and establish key provisions of the misnamed Employee Free Choice Act.


The Employee Free Choice Act (EFCA) would strip a worker’s fundamental American right to a federally supervised secret-ballot election when deciding whether to join a labor union and replace it with a “card check” system. This would leave the worker vulnerable to coercion and harassment by union officials. EFCA could also force workers and businesses into binding wage and benefit contracts. These contracts would be set by a government bureaucrat with no required knowledge of the industry and would be binding for two years. Studies have shown that if EFCA became law, 600,000 jobs would be lost in the first year alone.


All of these union paybacks add up to one thing: The construction industry will continue to bleed as these special-interest government mandates and proposals are implemented. The nation’s construction industry should not be allowed to fail because of the government’s penchant for favoring one group over another. The stakes are just too high.

The truth is by artificially raising the cost of construction projects the President is depressing the number of construction people hired, increasing the federal deficit and extending the recession.

You can read more of Jeff’s writing at his website, Jeffdunetz.com